When All Else Fails or SHTF?

A while back, Dan KB6NU noted the increasing number of preppers getting involved in ham radio. Preppers are people who are actively preparing for emergencies, natural disasters and disruption of social order. In our Technician license course, we’ve noticed an increase in the number of people identifying themselves as preppers.

Of course, amateur (ham) radio has a long history of emergency service and disaster preparedness. FCC Rules Part 97 says this is one of the purposes of the Amateur Radio Service: Recognition and enhancement of the value of the amateur service to the public as a voluntary noncommercial communication service, particularly with respect to providing emergency communications.

Historically, most radio amateurs approach the hobby from a technical or radio operating point of view, then find ways to apply it to emergency preparedness. The prepper tends to work the equation the other way…starting with the desire to have emergency communication capability and then working to get an amateur radio license.

Many prepper sites just give a quick overview of ham radio, positioning it with GMRS, FRS and CB radio. See Prepper Communications. Articles like this one give a more complete introduction to ham radio: The Skinny On Ham: Getting Licensed.  This one, too: Every Prepper Should Be A Ham.

You may run into some creative acronyms on these prepper sites:

There are web sites devoted to prepping with radio communications:

Many of these sites have useful information that may stretch your thinking on “being prepared.” Of course, some of these prepper sites (not the ones listed above) are a bit over the top and may have resulted from people going off their meds. Draw your own conclusions.

I’ve noticed a pattern of people creating prepper frequency lists, such as the one shown below. (Note that some of the ham frequencies listed do not conform to generally accepted band plans.) I can see the usefulness of having some assigned frequencies but its not clear to me how they’ll actually get used. I think the challenge for new prepper hams is to think through who they are going to communicate with and for what purpose. It’s also important to get familiar with the equipment and gain experience on the air, so when the EOTW happens you aren’t sitting there reading the radio manual. 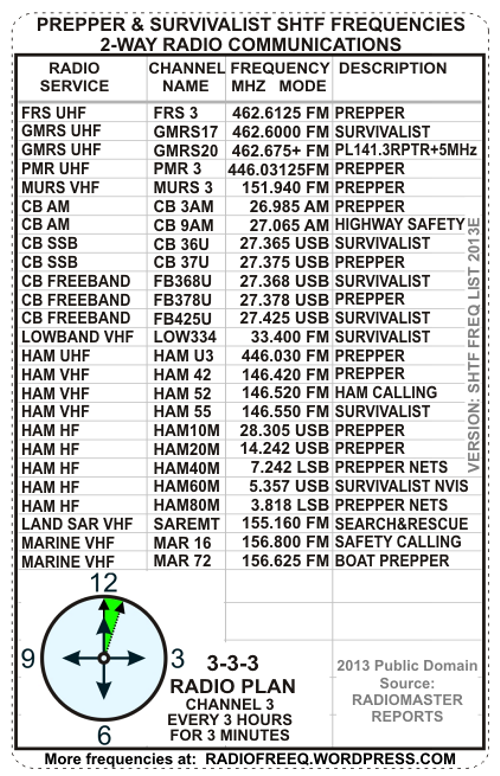 Whether you think of emergency communications as “When All Else Fails” or when SHTF, amateur radio is a resilient communication tool.

Added 7 Dec 2013: I came across this video that does a good job of introducing ham radio to the prepper crowd:  So you want a ham radio for emergency communications!

4 Responses to “When All Else Fails or SHTF?”