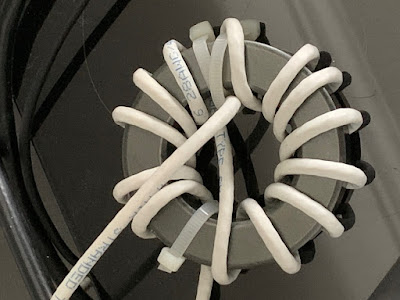 Here at VE9KK's household, my XYL has returned to part-time work from home and involves a computer and the internet to communicate regarding work. Last week while she was working and I was on the radio she told me her LAN connection kept dropping out. I did some experimenting and sure enough, it was my CW signal on 15m that was doing it. I quickly grabbed my last FT240-43 toroid and wrapped the CAT6 cable around it which did the trick!

I then did some reading and learned that the CAT cable should be loose around the toroid and not tight as this affects the small wire inside the CAT6. I also read that 7 turns were the magic number of turns. Finally and this is the question to my readers I read two thoughts on wrapping CAT cable around a toroid. One school of thought was it is perfectly fine and the other was it slowed down the internet speed? I never did a speed check on my wife's connection with and without the toroid. The reason for this is she never complained the speed dropped so why poke the bear! Has anyone out there had an issue with your HF signal dropping internet connections at home and what did you do about it?