We’ve Got Some Explaining to Do

There was a fun interaction on twitter the other day about how we represent amateur radio to the general public. It started with this tweet from @FaradayRF: 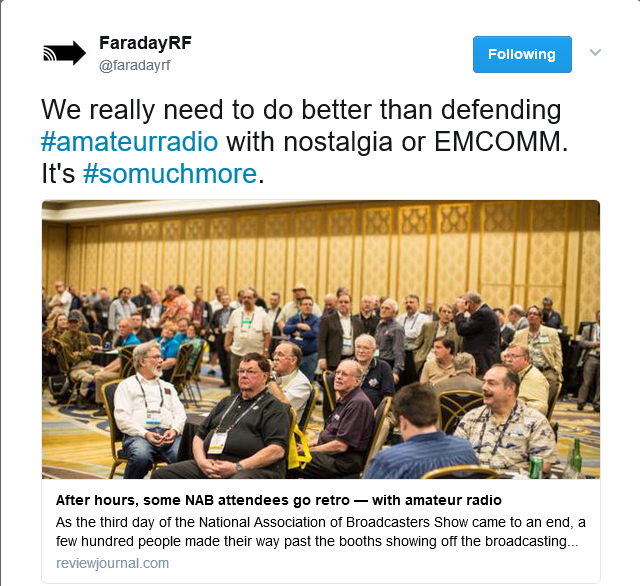 This refers to an article in the Las Vegas Review-Journal newspaper where the author decided to use the theme of “ham radio is retro” to tell the story of a ham radio gathering at NAB. I really hate it when ham radio gets positioned as “old technology” in the world of awesome wireless stuff. Clearly, some of our technology is dated, but the amateur service includes lots of new technology and experimentation. (Actually, the tone of the article was very positive, so we shouldn’t complain too loudly.)

So I replied, along with a few other folks: 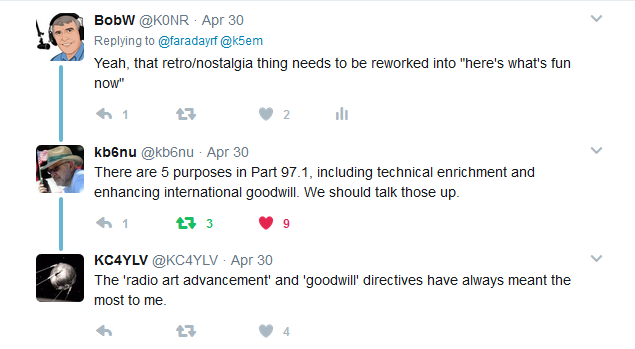 So KB6NU and KC4YLV took the discussion back to good old Part 97 of the FCC rules. (You ever notice how often radio hams like to quote Part 97? It’s right up there with the U.S. Constitution and the Declaration of Independence.) I tried to recall from memory the five things listed in 97.1 as the Basis and Purpose of the Amateur Radio Service, but failed.

I had to look them up, so I’ll save you the trouble and list them here. Actually, I am going to provide the KØNR Abbreviated Version (go here to see the full text):

These five things are still relevant and are being pursued today. Not all radio amateurs contribute to every one of these but as a group we are doing these things. The good news is that many non-hams do understand the When All Else Fails aspect of ham radio…most have had their cellphone become a useless brick during major incidents. Items b, c and d are all about learning new things, building skills and expanding the number of radio hams. We should talk more about that. Enhancing international good will may seem a bit quaint but this crazy world can always use another dose of that.

Part 97 does leave out one thing that is the ultimate attraction and, in fact, the universal purpose of ham radio:

To Have Fun Messing Around with Radios.

The post We’ve Got Some Explaining to Do appeared first on The KØNR Radio Site.