My first planned activity was to participate in the NJ QSO Party on Saturday.  The work party that I attended at the Middlesex County Office of Emergency Management went longer than I anticipated. I'm glad we got the work done that we did, though, as it was important that it got done before the Simulated Emergency test in October. When I got home, there was still plenty of time to participate in the contest - no doubt. Other chores had to be taken care of first, though; and I made sure I got those done. End result? One very tired W2LJ and no NJQP on Saturday.

After dinner, I sat down with the tablet and saw on the ARRL NPOTA Facebook page that Peter K0BAK was doing  a sweep of NJ activations this weekend, including AA17, the New Jersey Coastal Heritage Trail.  My heart sank a bit because he's such a superb operator and activator - does AA17 really need to be activated twice the same day? And if you had the chance to work either me or Peter .... heck, even I'd rather work Peter than me !!! 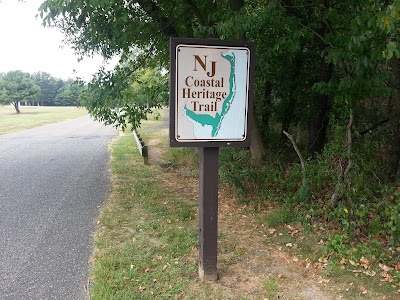 When I went to bed last night, I was really iffy about making the effort. The weather was supposed to be suspect but I decided to sleep on it, thinking perhaps that maybe it might be better to wait for another weekend.
Sunday morning dawned muggy and overcast. Not exactly the greatest of weather conditions. But then the thought occurred to me that K0BAK normally does most of his operating on SSB, and mine was to be CW; so I decided to throw caution to the wind and decided to go to Cheesequake State Park, anyway.
I left the house a little after 9:00 AM and got to the park just around 9:30 AM.  I found the Spring Hill Picnic Grounds to be deserted, save for a few parked cars. The occupants of those cars were all going off on hikes as the lot also served as the starting point for one of the park's many trailheads. With the picnic tables all to myself, I set up the PAR ENDFEDZ 40/20/10.  The line went up over a 60 foot tree with ease thanks to my trusty Joplin MO ARC Antenna Launcher.  I literally had the antenna up within minutes.  I've had enough practice with the launcher to now get a good shot on the first try, at least 90% of the time.
The setup was the usual, KX3 to antenna, the Power Werk deep cycle battery, the Palm Micro paddles and a set of ear buds.  The ear buds turned to be a life saver, as the picnic area turned out to be pretty gosh darn close to the Garden State Parkway, and there was lots of highway noise.  In some cases, there were also some ignition noise moments.  I thought I was far enough away where that wouldn't be a concern; but there must be a few vehicles out there that are close to being spark gap transmitters!
I got on the air at 1400 UTC, calling "CQ NPOTA" on 40 Meters at 7.034 MHz, and had my first QSO with W3JRR at 1415 UTC.  I stayed on 40 Meters for about 45 minutes before taking a break to stretch my legs and to use the rest facilities. Thank the Lord they were open!  I came back to the ear buds, and I could have sworn that I heard "BBO".  I thought that was my good friend W3BBO looking for me; as I spotted myself on the Cluster.  I called him a few times and heard no come back; so I decided to move on up to 20 Meters.
20 Meters turned out to be the better band.  My farthest DX QSOs happened there with S58AL in Slovenia and ON4RO in Belgium. I also ended up working Arizona and Washington state on 20 Meters. So even though I made it to Europe, this is where the Reverse Beacon Network picked me up: 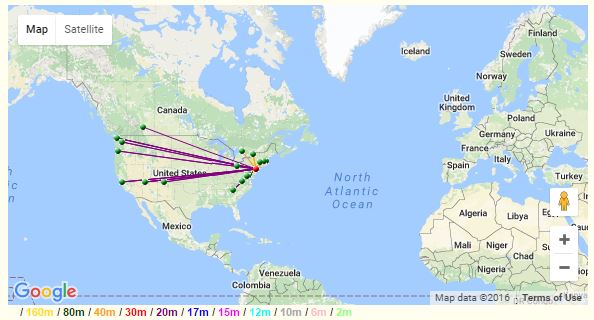 Just before 1600 UTC, I was visited by a Park Ranger who came to put up a sign showing that the picnic grounds had been reserved by a Baptist Church group for a BBQ.  It was booked for 1:00 PM local or 1700 UTC.  I decided to pack it in, anyway.  My original plan was to put in about two hours, so that I wouldn't be away from the family for the entire day; and I put in my two hours, so I was happy.
The highlights of the day were working Kay Craigie N3KN, Dave Benson K1SWL of Small Wonder Labs and Rockmite fame, as well as Paul Signorelli W0RW, of QRP and Paraset Pedestrian Mobile fame.  It's always cool when you go on an outing like this and hear the call signs of people you regard as friends.  Not to say that ALL of you aren't friends ........ but you know what I mean!
37 QSOs later, my activation of AA17 was in the books for the day.  I still hope to join up with Dave Hackett KD2FSI to activate the Pine Barrens and the Delaware Water Gap and the Appalachian Trail before NPOTA comes to a close - so stay tuned!
72 de Larry W2LJ
QRP - When you care to send the very least!
Larry Makoski, W2LJ, is a regular contributor to AmateurRadio.com and writes from New Jersey, USA. Contact him at [email protected].