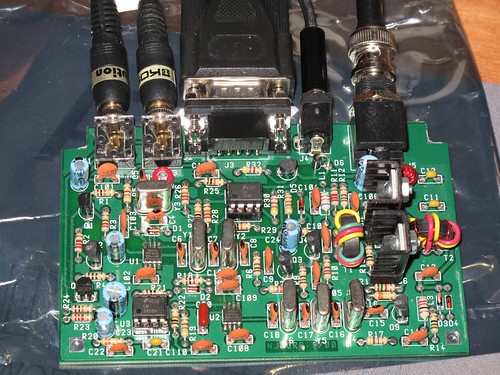 I finally finished my Small Wonder Labs Warbler kit last night.  This was started probably two years ago and then was shelved for no particular reason other than I was working on other projects.  Last week I decided it was time to get it finished and so have been working on it in the evenings.  It is a nice kit with a clever design based around colour burst crystals and the receiver is direct conversion.  It was straight forward to build but note there are two SOIC components, the SA612 mixers (look for U1 and U2 in the photo above).

When it came to the smoke test it worked first time. I adjusted the one tuning capacitor (the only adjustment), for frequency alignment and checked power out.  Alignment was done as recommended with W1AW which was coming in well (see the screenshot below). On transmit, I get 2W out on my Radio Shack power meter.  It is expected that you can get 3 to 4W out of the Warbler.  Given the accuracy of the meter I happy with what I measured.

I have an aluminium enclosure, which is a tight fit for the board, so there is some careful drilling and filing to come.  You can see in the photograph I have already cut out the corners to accommodate for the enclosure screw mounts.

Given the simplicity of the transceiver I am very pleased at how well it works. No contacts yet, so will have to see what the IMD is later.  Anyone within 100 miles or so of Ottawa want to try a QSO?