In an earlier post, I described my K9AY loop system.  QRX for an update on the outdoor portion.  But, after returning from a short and much-needed vacation at the beach yesterday afternoon, I whipped-up this little guy: 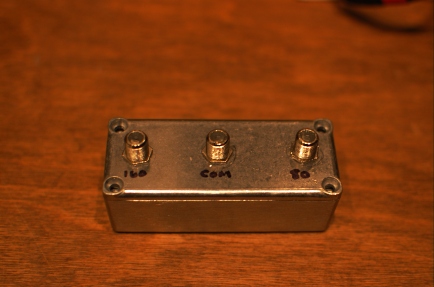 One of the big problems I have living in the city is overload from broadcast stations in the AM band.  (This is especially true in the heavily-populated, full-of-hot-air DC area—Ed.)  But, I digress.  I also wanted to protect the preamp and receiver when I was transmitting on the higher bands into nearby antennas.  So, some sort of filtering was in order.

I contemplated a number of topologies.  But, the W3LPL filters were a good choice because they’re cheap and very good.  A good reference on what I did is the NCJ article by K3NA and W2VJN about the VP6DX receiving antenna system.  The Ducie Island system is considerably more complex than mine.  But, they had more stringent requirements, more land for Beverages, and more money than I do.

Following the K3NA/W2VJN/W3LPL topology, I constructed a little diplexer filter for 160 and 80 meters that splits my K9AY to two receiver ports.  This splitter is the first thing after the K9AY coax passes through the station ground bulkhead, requiring a preamp on each port.  Since I don’t have a TX antenna for 160 yet, that port will go to the SoftRock-160. 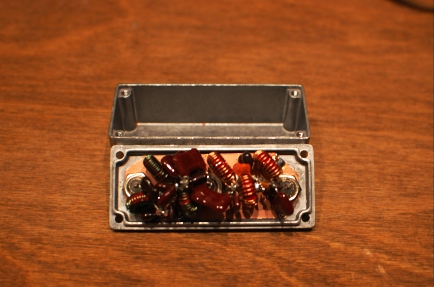 I’ve only tested the 80-meter portion (since I didn’t get the 160 portion done until this morning before work).  But, it works like a champ and there is no overload from broadcast stations.  Although there are some curious mixes coming from some of the big AM stations in the area that seem to be external to the receiver (this has been confirmed by N3OX—pretty amazing stuff); but, that might deserve its own post at a later date.