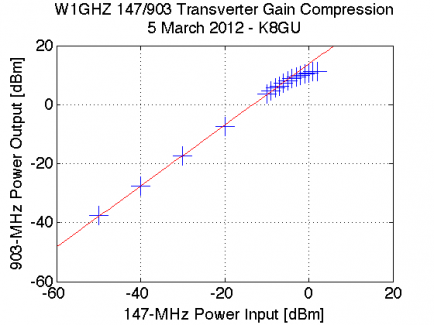 I managed to sneak into the lab again at lunch today for a few minutes and hooked up the now-packaged W1GHZ 903-MHz transverter to do a transmit gain compression test.  This test is a quick and dirty way to find the linear operating region of the transverter in addition to the expected conversion gain on transmit.  These two parameters determine the IF transmit level and what kind of power amplifier or driver stage will follow.  It’s an easy test to run if you have the equipment.  I locked the transverter in transmit by applying 8 volts to the TX MMICs and used a Rodhe and Schwarz SMR40 signal generator as the IF transmitter at 147.100 MHz.  On the transverter TX output, I simply connected the HP 8565E spectrum analyzer that I’ve used in the past.  Spectrum analyzers are not great power meters, but they give you a good enough idea of what’s going on.  The 1-dB gain compression point (that is, the point where the actual device gain sags 1 dB from the linear gain) is at an input of -3 dBm or an output of just under 10 dBm.  This compares favorably with the datasheet for the mixer and discussion with N3UM.