This afternoon I went for a stroll up Ling Fell, LDW-205. It was a fine afternoon and I wanted a bit of exercise. I took the VX-8GR so I could test the new QRU feature of Lynn KJ4ERJ’s APRSISCE/32 software that allows an APRS user to receive information about nearby objects on request. I have created a QRU server for Wainwright summits so that an APRS user in the fells could receive information about the nearest summits, to aid identification or navigation. 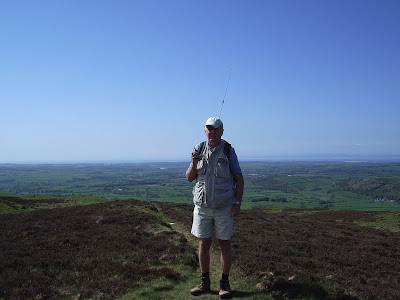 I put a 2m helical antenna on the rucksack support for the walk up, so the VX-8GR could send my position. The other channel was monitoring 145.500MHz (S20) the FM calling channel. As I gained height I started to hear some loud bursts of interference, a combination of a whine and a buzz, on S20. When I got to the top I switched antennas to the RH-770 dual band telescopic. My first call was answered by Colin, 2E0XSD. His signal was moving the meter on the VX-8GR to an S3 or 4 but there was intermittently a lot of crackly interference over his audio. I tried engaging the RX Attenuator option in the VX-8GR menu and it did seem to improve things a bit, but not completely.

A bit later, when I was testing the QRU server, I could hear the APRS packets coming back from my gateway (which is line of sight from Ling Fell, just behind me in the distance in the picture) but they sounded distorted and the VX-8GR didn’t decode them.

I wondered if there was a fault with the cable to the rucksack mount so I put the antenna directly on the radio. My next call was answered by Geoff G4WHA from his car in the car park in Penrith. He was 5 by 1 but his signal was cutting out intermittently. I got the feeling the problem wasn’t Geoff’s, but was my receiver cutting out due to overload from some nearby transmitter. There is a commercial mast a couple of miles away on the other side of the valley, though I have no idea what is on it.

I am starting to get a feeling that the receiver in the VX-8GR is not much good on summits when connected to a decent antenna. I first noticed odd things with the original VX-8R I had when I tried it out with a SOTA Beams MFD. There have also been several occasions when other people using VX-8 series rigs on summits have failed to hear me, even though I could hear them clearly and in some cases was running much more power than they were. This is quite disappointing. I really like the VX-8GR and much prefer it over the Kenwood TH-D72 which I have been thinking about selling. But perhaps it would be better to keep the Kenwood.

I wish that I had the test equipment to try to compare the strong signal performance of my various hand held radios. HF radios have their receiver performance exhaustively tested and the results of tests by the likes of Sherwood Labs are endlessly debated on various reflectors despite the fact that the only difference it is likely to make is whether you can copy a very weak station right next door to an extremely strong one. But the reviews of VHF radios focus only on matters like the ease of use of the menu system, how many memories it has or how the scanning works.

I think the receive performance of VHF/UHF hand helds is just as important as for HF receivers. If a receiver can’t cope on a hilltop on the middle of nowhere how will it fare with the signal levels in a busy urban environment? Heck, you might be missing vital emcomms messages and not know it! It’s about time the ham radio magazines started publishing blocking dynamic range and cross-mod figures for hand held radios.