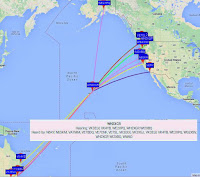 The past few weeks have seen many of the VK 630m WSPR stations making it into North America's west coast and points east. VK2DDI, VK2XGJ, VK3ELV and VK4YB have been the signals most often seen. Particularly dominant is the signal from Roger, VK4YB, the northern-most station, located in Moorina, Queensland, near the Pacific Ocean.

Roger's signal has been decoded locally by myself as well as VE7BDQ and VA7MM, creating excitement over the more normal nightly spots from the central states.

Roger has sent the following information to me regarding his well-planned system:

My antenna is serendipitous.
I am a complete novice on 630m. I only came on the band about 2 months ago at the request of a local friend, Peter, VK4QC. That is not quite true, because I was on the band once before, about a year ago and made one contact and then managed to burn out the front end of my Drake TR7, which I had roughly converted to 630m operation.
My QTH is atop of a stony ridge on 10 acres. The previous owner said there was some soil somewhere, but I haven't found it yet! Ground conductivity is very poor, I think. If you drive in two stakes about six inches apart, an ohmmeter says infinity. That's if you can drive in a stake. Because after the first quarter inch you hit shale rock. Interestingly the shale layers are at about 60 degrees to the horizontal. There are some quartz inclusions. Yes, I have tried crushing the quartz and panning it - no gold!

Getting back to my story, I needed to put up a 630m antenna in a hurry. The idea of winding a big loading coil with the rotatable inner coil was a bit daunting. And putting down ground radials or an earth mat was out of the question. So, using only some wire, string and a bow and arrow, this is what I came up with:

What is missing from that drawing is that the wire is running North-East to South-West, all in a straight line, with the shack at the North-East end. It is line-of-sight from the top of the vertical section to the Pacific ocean. I didn't put the direction on the original drawing because I didn't think it was important. I thought it was essentially a top-fed vertical and would therefore be omni-directional. Nothing could be further from the truth. Experience has shown that it is very directional. I have never had a single report from Japan, and yet my signal has peaked at -3 in Hawaii (about the same distance). Also VK3ELV, using a quarter wave near vertical, gets almost nightly reports from both Japan and Hawaii and at similar strengths. That would seem to indicate a front to side ratio of more than 20dB for my antenna, which is surely impossible?
I estimate the feed point impedance is about 3000 ohms. The ATU has 48 turns on the secondary, tuned by fixed capacitors of 960 pF in parallel with a 500 pF variable which is about two thirds meshed. The primary is 5 turns fed by the transverter having a 50 ohm nominal output. The impedance at the top of the secondary should be near 5000 ohms, but the antenna feed wire is tapped about two thirds of the way up the secondary coil, which gives 1.03 : 1 SWR. The earthy end of the coil is connected to the mains earth and the metal work of the shed. I haven't tried terminating the far end. I did think about connecting it to the fence wire that runs round the property but I thought that might be a bit dangerous. There would be high voltage points in places. The transverter output is nominally 50 watts, but it is giving about 90 watts in reality.

Like many on 630m, Roger is using an Elecraft K3 into a transverter to generate his 630m 90 watt signal. It is interesting to see the strength of Roger's signal here throughout the night but particularly during the 1152-1156Z time slot. His signal peaked at -18db, right at the level of audibility ... CW levels, but quickly dropped. Throughout the night however, his signal was easily within range of the capabilities of the two-way JT-9 WSPR QSO mode ... had either of us been seriously involved in a two-way JT-9 QSO attempt during that night, it would have been quick work I think.

John, VE7BDQ, has already managed to push his WSPR signal to VK on more than one occasion ... this from a typical, suburban backyard inverted-L. The possibilities are exciting, but will mean some middle-of-the-night vigilance!
As activity on 630m increases in both VK and VE, we are beginning to see more and more DX possibilities arising, particularly during the Spring and Fall equinox periods when this path seems to peak. As activity in Japan picks up, it is only a matter of time before some of them begin showing up in numbers here on the west coast, as the path to JA has always been reliable and somewhat less demanding than the path to down under. I suspect also, that as the present solar cycle draws down (and supposedly goes 'quiet'), 630m Trans-Pacific signals will grow even stronger,and on most other paths as well.
In view of the JT9 QSO possibilities, I think it is clear that I now need to seriously think about building a transverter, allowing me to at least be in 'ready-mode' for the coming 630m challenges ... hopefully for the next equinox.