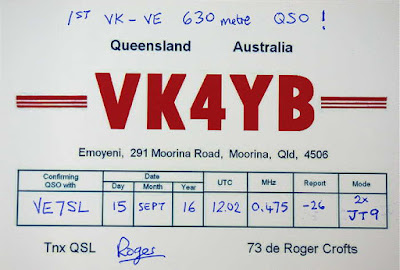 On Saturday morning, VK4YB and I had our second QSO on 630m using JT9, the WSPR QSO mode. Signals were slightly better than our initial contact but still far from previously seen conditions on the 11,000 + km Trans-Pacific path. However what happened following our contact was equally exciting.

I thanked Roger for the contact, via the ON4KST LF / MF chat page and indicated I was going back to bed as it was still pre-sunrise here on the west coast. He indicated that my signal strength had increased noticeably on my last two transmissions and asked if we might try CW for a few minutes.

We had previously devised our CW protocol to follow a similar one to that used in CW moonbounce work. We would transmit and receive in one minute sequences, with me transmitting on the even minutes and Roger on the odd. Instead of using the RST code for signal reporting, an 'O' is used to indicate reception strong enough to have been able to copy both calls. Both stations are required to copy the 'O', which cannot be sent until both calls have been fully copied. An acknowledgement ('R') must also be sent and copied by both stations to indicate receipt of the signal report. Once the 'R' has been copied, the final transmission(s) are a '73'. Once both stations have copied the 'R', the '73' is technically not required but when copied, further confirms the completion of a valid contact.

For both of us (late at night for him and pre-dawn for me), it was a bit of a mad scramble to make a quick changeover to CW. From my end, there are a number of changes that must be made correctly to avoid over-driving the transverter and damaging the frequency doubler as well as changing to manual PTT to avoid hot-switching of the antenna relays. I also need to bring up the PC's visible clock-face with its sweep second-hand ... but we both made the transition in about two minutes.

We stopped at my sunrise but Roger had only copied fragments of my transmission and never enough to copy both calls. It appeared that we could both have used a few more db on the path as previous estimates have indicated that we might see at least another 5 or 6db yet, on a really good morning. As well, it seemed that the TP pipeline on Saturday morning had centered itself to my south, around northern California and VE7 was on the far northern edge of the propagation path.

Well it seemed that Sunday morning had moved the path further to the north and our 'extra 5-6db' was on hand. All of the local VE7's had numerous decodes of Roger's WSPR signals, including my own 20 decodes in the pre-dawn hours, but ... as 'Murphy' would have it, Roger was suffering receiver-blocking thunderstorm / lightning noise, keeping his K3's s-meter hard against the pin and absolutely no chance of a CW sked. It may have been a much more exciting morning had the spring weather near Roger been more cooperative.

This morning, the weather was still restricting good reception down-under but is forecast to dissipate shortly. But Murphy has not finished with us yet, as the TP path had also noticeably deteriorated today as well. It looks as though the challenge will now be getting everything to come into perfect alignment before the summer weather in VK shuts our CW attempts down for the season.
Steve McDonald, VE7SL, is a regular contributor to AmateurRadio.com and writes from British Columbia, Canada. Contact him at [email protected].