VK on a whip antenna

The amazing power of the WSPR mode to enable weak signals to be received over long distances was demonstrated conclusively when my 2 watt signals, transmitted into a 1.3m long telescopic whip antenna from inside the G4ILO shack,were received in Australia and the USA, not once but several times with SNR reports of up to -19dB.

These spots were not achieved using a hand held radio as they occurred early in the morning when I was asleep. But they were made using a home made portable 30m whip antenna that I designed to be used with the VCXO-AXE portable WSPR transmitter I recently built. Here is a picture of the antenna taken during the tests. 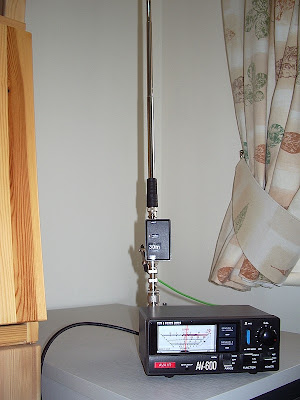 The antenna consists of an L-match mounted in a small plastic project box, with BNC sockets for the transmitter and the whip antenna.

The constructional details can be gleaned from this internal view here. Click the image to see a much larger version. 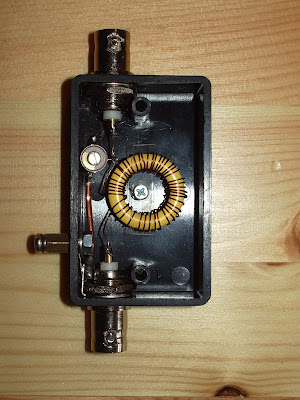 The loading coil consists of about 46 turns of 28SWG wire on a T80-6 toroid. The matching capacitor is a 4 – 40pF trimmer. The number of turns was determined empirically (i.e. using trial and error) so don’t ask me for details of how to make one for other bands. There may be formulas for calculating things like that but I don’t know them.

It would have been difficult to make this antenna without an antenna analyzer like my RigExpert AA-200 which displays the SWR across a range of frequencies graphically. With my first attempt at the inductor it was possible to obtain an SWR null at 10.140MHz but it was rather a broad dip and the minimum was around 3:1. However at lower frequencies I saw that I was able to obtain a much deeper, sharper null. This made it clear that what I needed to do was remove some turns until the deep, sharp null was at the frequency I wanted. A deep null indicates higher Q and therefore better efficiency.

You can see the SWR curve of the final version below. 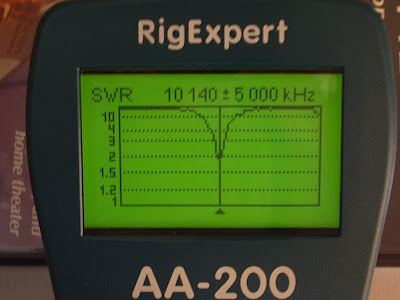 Note, however, that this was taken inside the shack in the test position where reflections spoiled the SWR and broadened the dip. When measured out of doors the SWR curve dipped deeper and was narrower as long as I stood clear of the antenna. (It was interesting to note how the SWR was affected even if I was a metre away from the telescopic whip. This suggests efficiency would be adversely affected when used in true hand held fashion.)

A good ground or quarter wave counterpoise wire is needed with this antenna. The resonant frequency is affected by the ground system used as well as the length of the whip and the position of the trimmer. If you don’t want to take an antenna analyzer to the field to check and tune the antenna before operation you should use the same counterpoise. So it would be advisable to pair the counterpoise with the antenna.

Further tests would be useful to determine the extent to which a good match is reproducible in different locations using the same whip length and counterpoise without retuning. 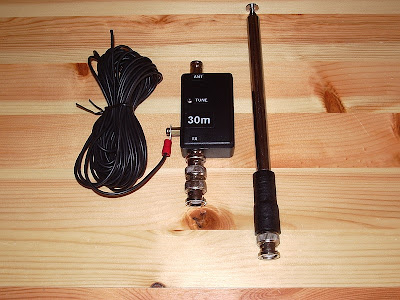 In case retuning is needed I added an access hole for the tuning trimmer. The resonant frequency can also be changed (increased) by shortening the telescopic whip a section or two.

This has been an interesting project. As a result of it I now have a completely portable, pocketable, battery powered system capable of sending a radio signal half way round the world, and I have developed a useful monoband 30m antenna.