Virtual Radar for a tenner – RTLSDR and ADSB: It works!

I had some time this morning to experiment with the RTLSDR USB dongle which I’ve previously mentioned. Designed as a DVB TV/DAB receiver, with different drivers, they can be used as a wide band scanning receiver. As I mentioned yesterday, I’d seen Pete 2E0SQL report success in decoding the ADSB transmissions from aircraft with his stick.

I used my latest USB dongle with the E820T tuner – having made sure that the drivers were up to date. The first ADSB decoder that I tried was the ADSBSharp program which you can download from here Having installed that – I started the program with the dongle plugged into a USB port and a small antenna which came with DVB stick plugged in. Immediately I could see that the dongle was decoding frames – and quite a few of them.

I wanted to try and plot them, so I started up ADSBScope which you can download here

From the menus, I selected Other/Network/Network setting and set the Raw Data CLIENT (not the server) to port 47806 which ADSBSharp was ‘broadcasting’ on. The URL should be set to 127.0.0.1

I then pressed the RAW Data Client icon – it’s the right hand of the group of three ‘network’ icons on the icon bar. Lots of messages started appearing in the right hand pane, but very few position decodes. I filtered around with the filter but didn’t see much improvement.

Honour was sort of satisfied as I knew the data was being decoded, but I wondered if if I could do better. I’d seen some discussion on Twitter about the RTL1090 software which would work with the RTLSDR dongle and should decode the data. I downloaded the program and installed it from the RTL1090 website

Running the program up, I could immediately it seeing aircraft and displaying ‘Active Flight’ data. However, even after reconfiguring ADSBScope’s Raw Data Client to point at RTL1090 which was running on port 31001 ADSBScope was not displaying flight information.

I then remembered seeing in the ADSBSharp instructions that you had to configure the client to use AVR format. I had no idea what that was, but wondered if I should get RTL1090 to send the data to ADSBScope in AVR format. This was what cracked it! Simply start RTL1090 from a command prompt with the /AVR flag and the data will then be sent to ADSBScope and mapped.

I am surprised how sensitive the receiver is. Not as good as the LZ2RR  ADSB dongle, but as you can see from the map, the system is quite capable of receiving aircraft over distances of 20 to 50 miles away – even with a basic indoor antenna. 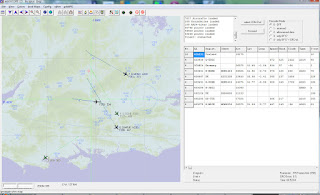 Definitely a great use for the DVB dongle, especially if you have been interested in Virtual Radar, but were put off by the prices!

10 Responses to “Virtual Radar for a tenner – RTLSDR and ADSB: It works!”