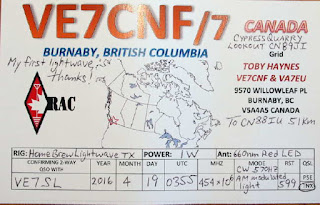 His testing to date has been limited to within his own suburban yard, with the transmitter being set up on the south side of the house and the receiver set up on the north, while basically pointing things straight up.

Several tests have already been done with exciting results, including audible CW being returned from a low (5,000') cloud ceiling and weaker returns noted on clear air scatter but readily detected in the CW QRSS mode. Toby has also interfaced his PC audio, via amplifier and FET driver, to enable him to use WSPR and JT9 modes, resulting in positive signal returns using these two digital modes of modulation.

Toby described some of his results and methodology in a recent e-mail updater:

I've done some lightwave backscatter experiments this last week. The transmitter is on my front deck, pointed straight up as verified using a level across the lens end of the box. The receiver is in the back yard and pointed up also. Between the two, the house is about 30ft high and blocks any direct light.

Last night May 8 UTC was clear and I was getting a QRSS10 level signal with the receiver pointed at elevations from 70 to 85 degrees, through the transmitter beam. There was nothing received from straight up, so the clouds were too high for cloud backscatter. At 80 degrees elevation I got the best signal. I've attached an Argo screen grab of QRSS10 (FSK CW with the 570 Hz tone as key-down).

During my tests I used the QRSS3 speed setting of Argo to point the receiver around and find the signal. It was pretty weak but still visible at that speed. When I slowed to QRSS10 it became easy copy.

WSPR2 was decoding consistently and JT9 was about 70%. I tried JT65, BPSK31, and MFSK8 but the SNR was too low for those to work.

... I'll try CW and digital again when there's some lower cloud conditions. That’s tough to get without rain at the same time.

I did get dew on the receiver last night, so I'll be adding heating resistors inside the boxes to keep the lenses warm. Electric heating has worked great to keep dew off the optical surfaces of my telescope. I'll also look at adding shrouds to shield the lenses from the cold sky.

Last night was good for backscatter from low clouds, at 1300 to 1900 ft according to airport weather. I had to stay up late though, as the cloud didn't move in until midnight.
I've attached a couple of CW recordings. Early on the signal was weaker with QSB. Later it was strong and solid.

I've also attached a screen grab of WSPR2. Signals were up around 0dB this time.


I played with a bunch of digital modes and FMHELL and SSTV. Everything was working pretty well off the clouds.


The nextstep is to move the rx farther from home, then to try sending signals over to John or Steve by cloud bounce.
You can find more information and all equipment details, including schematics, on VE7CNF's lightwave web pages here.

Toby's nearest lightwave neighbour, VA7MM, is in mid-build and is working to complete a system capable of running overnight cloudbounce / scatter tests between their two respective backyards ... the NLOS distance is about 15 km. Although the path includes some bright commercial lighting QRM, with narrow-band modes such as QRSS or WSPR, it may not be a problem. I suspect one of the biggest problems will be getting suitable weather as, here on the west coast, dense clouds usually turn into rain very quickly, especially near the coastal mountains where Toby and Mark are located.

I find Toby's results to be both encouraging and exciting! It will be interesting to try some cloudbounce between their respective stations and my own and maybe hopping the NLOS path across cloudy Georgia Strait. It may well be possible to do this in one of the quicker QRSS CW modes such as QRSS3 or QRSS10, both of which can have fairly fast exchanges of the required information (calls, signal report and final confirmations). Failing that, slower QRSS30 or one of the weak signal digital modes such as JT9 / WSPR which have the ability to dig deep (-30db) into the background noise may be the answer ... there is much to learn yet!
Steve McDonald, VE7SL, is a regular contributor to AmateurRadio.com and writes from British Columbia, Canada. Contact him at [email protected].