Hot on the heels of his recent 630m maritime adventure, Toby (VE7CNF), continued to demonstrate the flexibility of his small 20W 630m portable system with an afternoon of fixed 'mobile' activity from his vehicle.

"Are any of you available on Tuedsay for a 630m land mobile test with VE7CNF/7?"

Toby set things up at Sea Island's Iona Regional Park, situated on the ocean's edge just north of Vancouver International Airport. This gave him a good shot to several of the local 630m ops around the local region.

When Canadian amateurs first approached RAC and Industry Canada for a slice of spectrum near 500KHz, the main goal was to secure a frequency range that would support excellent groundwave propagation for a possible future emergency data network. Whether this will ever happen or not remains to be seen, but Toby's afternoon outing, along with the recent 630 marine mobile activity certainly helps to demonstrate the potential for the band to provide reliable signals with relatively small antennas and low erp.

Toby's basic transverter is rather unique in that the transmitter's FET power mixer also passes signals backwards to function in the receive mode:

"I’ve developed a 630m band linear transverter that produces 30W of transmitter power. It has no power amplifier and draws only 175 mA from a 12V power supply. It works for both transmit and receive with no T/R antenna relays or switching circuits.

I’ve used a bidirectional high-power mixer circuit to directly take 100W of power from a 160m band transceiver and produce useful output power on 630m. For receive, 630m signals can pass backwards through the circuit and are up-converted to 160m.

My transverter is actually the small box on the dash above the steering wheel. The gear in the back near the variometer is used only during setup to resonate the antenna. It's a signal generator and oscilloscope. The AC transformers are just an isolation transformer that I need to make the test equipment work with my 12V-to-AC inverter."

Toby's own report on the outing:

"VE7CNF/7 Operation was from the Iona Beach area near Vancouver, grid CN89jf. The location is right beside salt water. There are no nearby power lines so rx noise was S0. Operation was in daylight, around 4 pm local time. Signals were excellent and all CW was easy copy.

The antenna is about 24 ft high and the fishing-rod-and-wire top load is pulled forward about 8 ft. The matching circuit is a loading coil, variometer, and autotransformer. My Tx power was 20W TPO and estimated EIRP 75 mW. The rig was my home brew transverter with an IC-7410." 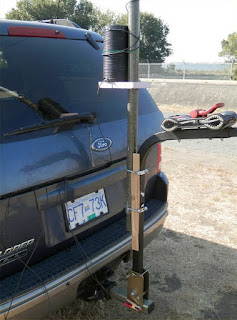 "This was great fun. I'll have to try more locations, and see if I can improve the equipment for easier setup. I had great copy on Roger 529 and Jack 569. Working Jack was a surprise, and his signal was excellent. Being beside salt water is magic. Rx noise was so low at that location, near Iona Beach CN89jf." 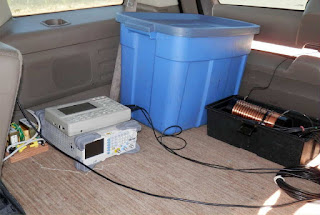 Our 'new' band continues to demonstrate its ability to offer exciting opportunities to experimenters, home-brewers and DXers alike and for those with the creative imagination to push new boundaries, who knows where one of the first frequency ranges to be used by amateurs back in the 20's might eventually take us.

I can visualize, at some point in the future, the usefulness of a province-wide 630m emergency comms network utilizing a basic 'grab and go' system based on much of Toby's demonstrated work.

If you are a Canadian amateur why not join the fun on 630m now? U.S. amateurs will be arriving shortly and when they do, things should be getting even more exciting on the new band!
Steve McDonald, VE7SL, is a regular contributor to AmateurRadio.com and writes from British Columbia, Canada. Contact him at [email protected].