Updated RTL1090 – more planes on your SDR based virtual radar

A few days ago, I noticed some mention about a new version of the RTL1090 program. This is Windows software which you can run on your PC in conjunction with the RTL-SDR dongles and plot ADS-B transmissions from aircraft. For a bit more detail, please see my earlier blog post

Yesterday evening I downloaded the program and installed it, which was straightforward. My first impression was that I was seeing more aircraft than I had before. With the small antenna provided with the dongle on the desk in front of me, I was seeing aircraft further out than I had done before with the RTL1090 software. Testing again this morning, the same seems true.

As well as seemingly being a bit more sensitive, the new version of the RTL1090 software provides a bit more information in the List view abut messages which have been decoded, which might be useful or interesting (or encouraging) if you have not yet got the link to a plotting program working yet. 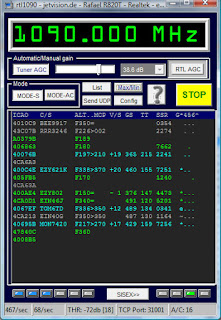 It’s possible that the plotting of more distant aircraft is due to tropospheric conditions at 1090Mhz, but I suspect not! 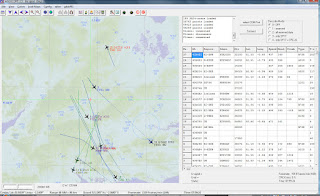 The other thing that looks quite interesting is that the team have produced a program to interface with RTL1090 and plot aircraft on a map. It’s called Globe-S and can be found here – I haven’t yet installed it, but it looks a nice interface.