I did a quick lash-up of the UHF FM transmitter module I received a few days ago which I was planning to use in a low-power Echolink node, mainly just to see if it worked. It did, but I discovered a small snag. The audio output isn’t squelched. 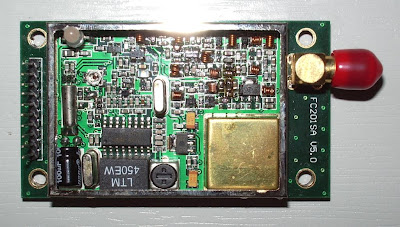 The Echolink software requires either normal squelched FM audio or a carrier operated squelch signal on one of the serial port control lines. As neither of those is provided I guess I am going to need to generate a squelch signal derived from noise. But as I am not knowledgeable enough about electronics to design my own circuit I am going to have to find one first. This appears easier said than done, though there seem to be a surprising number of patents on the subject.

It isn’t an urgent problem as I’m not in any hurry to build this project. I’ll probably have more enthusiasm for it once the gloomy autumn weather starts.