Sometimes with DX, it’s better to be lucky than good. Well, I really shouldn’t say that.  I know nothing of being good when it comes to DX, but I sure can relate to lucky.

Band conditions were good today, and I went out to the Jeep at lunchtime to find 15 Meters hopping!  I heard a huge pileup around 21.023 MHz and I think it was for JA7SGV/6V in Senegal.  He was loud here in NJ, so despite the pileup being furious, and despite having worked Senegal on another band, and because I’m an optimist at heart, I decided to give it a go.  I turned on the “Dual Watch” feature on the KX3, hoping that I would be able to figure out where he was listening.  After listening for a goodly bit, it became apparent that I was not hearing the same stations that the DX station was going back to. So I hoped for the best and started throwing out my call at 21.025 MHz. It seemed as good a place as any to start.

Then all of a sudden, my call comes back to me.  But it wasn’t from the ear bud tuned to 21.023 MHz, but instead from someone transmitting on 21.025 MHz.  I quickly turned off “Dual Watch” and deactivated the split function and twirled the main VFO up to 21.025 MHz.  I thought just maybe it was someone who heard my call sign in the pileup, recognized it, and wanted to say “Hello”.  A half second later, when I got up to 21.025 MHz, the station was still calling me and sending out “W2LJ 579 TU BK” waiting for an acknowledgement.  Obviously, this was NOT someone wanting to say “Hello”. So since the station was loud, auto-pilot and habit kicked in and I sent back “DE W2LJ TU 599 NJ BK”. 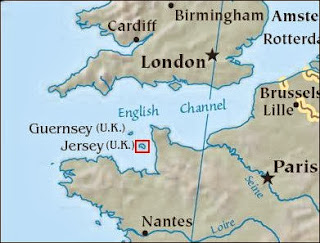 It turns out that it was MJ0ASP, located on the Island of Jersey.  A DXCC entity that I have never worked before at all, let alone via QRP!  How cool is that!  Tried for Senegal, but got a brandy new one, instead (albeit by accident!). Add to the fact that New Jersey was named for the Island of Jersey, so there’s a little historical connection there, too..  My hat is off to Elecraft, because if it weren’t for the “Dual Watch” feature on the KX3, I might have missed Jersey entirely.  A very good day on 15 Meters, indeed, as a little while later, I also worked Luca IK3VUT in Italy and Pep EA6FG on the Balearic Islands

I was listening for K3WWP and KC2EGL on 40 Meters, as they were scheduled for another Parkpedition today.  I didn’t hear anything on 7.041 MHz, so I broke down, packed up and headed in. Checking e-mail, it appears that it was raining in Kittaning, so John and Mike put lift off on hold for about an hour or so.  Can’t blame them. Who wants their equipment to get wet?