Two topics that I wanted to bring up today:

Number One – Don’t forget that this weekend (starting in about 45 minutes from the time that I am typing this out) is the CQWW DX Contest – CW.  The exchange on this is soooooooo simple – RST and your CQ Zone (in my case, that would be 5).

If you are thinking of starting QRP DXCC, in the middle of working on QRP DXCC, or towards the end of reaching QRP DXCC – this contest is a good way of helping to achieve your goal.

A) There will be plenty of DX stations on the air.  You WILL find ones that you will be able to copy.  Search and pounce until you find someone that doesn’t sound like a buzzsaw to you.  Hey, I’ve been at this for over 30 years and I still run into stations where I just shake my head and say,”Huh?”  If you’re not 10000% confident in your CW copying capabilities, you will have the chance to hear that one station give out their call a jazillion times as they run stations. And if that still doesn’t work for you, and you can only copy a partial call – it’s not a mortal sin to log onto DX Summit or some other DX Cluster to see if you can find that station listed by someone else on the band/frequency that you are hearing them (as long as you are not “officially” entering the contest – then I believe the use of spotting is not allowed). But make your best effort. By the end of the contest you will be amazed at how much your CW copying ability can improve in the course of a weekend.

B)  Put out of your mind that you are QRP. I really mean that. Approach the contest just like anyone else running a 100 Watt barefoot rig.  Look, you’re not going to be able to work everyone you hear – but concentrate on the loud ones at first and don’t be afraid to throw out your call.  Contesting brings out the bionic ears on some of these guys and it’s amazing what they can pull out of the aether – ESPECIALLY towards the end of the contest when they are still hungry for points.  Serious DX contest stations that might not otherwise give you the time of day under normal circumstances WILL go out of their way to pump up their contest score.  Take advantage of that.  As the contest progresses (especially the last 24 hours) you will find that you will be able to work stations other than just the loudest ones, too.  But don’t beat your head against a wall.  If you’re trying and you’re just not being heard, move on and come back and try a little bit later.  Propagation may improve and work in your favor.

Number Two – The Android tablet has some Ham apps available that I didn’t even think of when I purchased mine – namely the Zinio and Kindle apps, which are both free by the way. 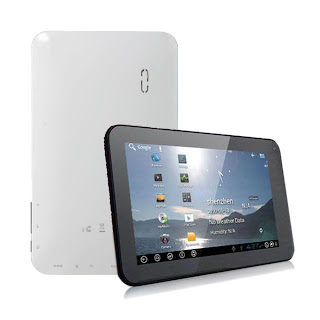 “Ham related?” you ask?  Yes, through Zinio, I can read both CQ Digital and WorldRadio Online (Note – the subscriptions for these are NOT free). And since the tablet is small and is a WiFi device, I can take it with me into “The Library” to read, if I choose to – or just about anywhere else for that matter.

The Kindle app is strange in a way.  For books, I actually prefer using my Kindle.  But for e-zines that come in a .pdf format?  It’s perfect!  I could never get the “K9YA Telegraph” to load into my Kindle properly. But with the Kindle app on the tablet, it’s better than sliced bread! Prior to this, when I wanted to read “The Telegraph”, I had to sit in front of the desktop or the netbook.  Not always the most convenient situation. I loaded the latest issue onto my tablet just to see how it would work; and I was like a kid on Christmas.  I have a whole bunch of back issues on my desktop computer that I am going to move onto the tablet via DropBox.  Now I will be able to enjoy them in a more relaxing setting.

The ARRL just recently introduced an app for idevices for QST Digital.  Hopefully, they will come out with an Android app soon and I can do all my Ham Radio magazine reading on my tablet – with the exception of QRP Quarterly, of course ……. although………… anybody from QRP-ARCI reading?  😉