In just over a week, I’ll be heading down to Florida to visit family, and, as I’ve done on previous trips, I plan to be operating from Lido Key, IOTA # NA-034 from March 21 to 23. My current plans are to be on the air during my local afternoon between around 1700 – 2200 GMT, on 14.260 or 21.260 (the standard IOTA frequencies), phone only. This is very much a “holiday style” operation, so those operating times may vary, and depending on band conditions, I might set up elsewhere.

For this trip, I’ll be taking my Buddipole and using it on top of the same 8-foot mast that I used last summer in Costa Rica. When I was in Costa Rica, I was able to bungee cord the mast to the railing of the balcony, but since I’m not sure that I’ll be able to do the same with the picnic tables at the park where I’m planning to operate, I figured out how to guy the mast using some lightweight tent stakes, some line, and some small carabiners that I picked up at a local outdoor store. The folks who sell the Buddipole do make a guying kit, but I thought it would be nice to see if I could make something myself. 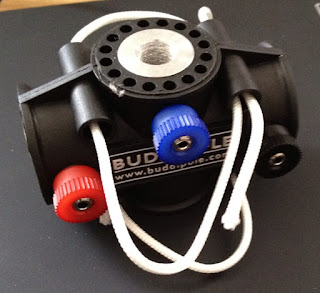 As I’ve learned, I always try out any new setup before I travel, leaving at least a little less chance for last minute problems. Yesterday afternoon, I set up everything in the backyard as a test. What I did was to run some line through the holes on the Versatee  to use as an attachment point. I then used 3 lengths of line and made a taut-line hitch on one end of each which I to put onto the tent stake. On the other end, I connected a very small S carabiner which I used to clip onto the lines on the Versatee. This was a lot easier than trying to tie line-to-line. 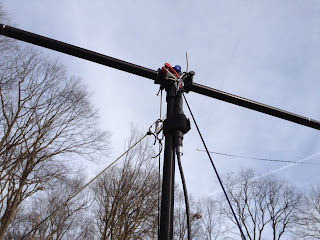 Because I learned the hard way that it’s pretty easy to break a whip if the antenna isn’t supported properly, I first made sure that I could connect the Versatee to the mast (without the arms or whips), attach the lines to that, then stand it up and tension the guys so that the mast seemed stable. I realized that I needed to keep the guy lines probably a bit closer than I would have liked to the mast or I wouldn’t be able to reach the hitch knots to adjust them. While I could have used adjustable knots to connect to the carabiners, in use those would be at the top of the mast and would be unreachable. As it turned out, it worked out pretty well the way I set it up. I had to first roughly estimate the 120 degree separation between the stakes around the mast, and I got lucky on my first try. 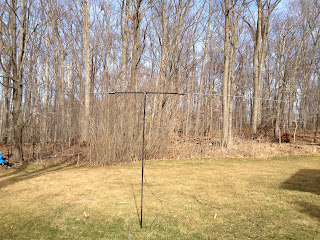 After seeing that this seemed to be pretty stable once I put some tension on the guy lines, I took it down and screwed in the antenna arms, coils, and whips, though I left the whips fully collapsed. I raised it back up, tightened up the guys (actually I just had to tighten one guy because of the way I’d lowered things), and it still seemed pretty stable, so I lowered everything once again, extended the whips (I’d already connected the wander leads to the proper location on the coils) and raised everything up. (If you’re viewing this on my blog page, you can click on the pictures to see a bit more detail, which is particularly helpful for the one showing the antenna fully deployed).

I connected the feedline to my radio (I’d brought my Icom 706MkIIG and a small power supply outside) and the built-in SWR meter in the’706 showed good SWR over the phone portion of 15 meters. I tuned around to see if I could find a station to work and I came across was Pedro, EC8AUZ. We had a nice little chat and he told me that my setup was working well, which was all that I could ask for.

At only 8 feet above ground, I know that the pattern for the antenna is going to be distorted. As I was set up with the broad side of the antenna roughly aligned Northeast/Southwest, it was good to know that I could make a 3500 mile contact due east with that setup.

I still have a few things to do before leaving, but it looks like I should be all set as far as the antenna goes. I hope to work some of you while I’m in Florida. If you’re in the Sarasota area, drop me and email and maybe we can get together for a bit while I’m there.