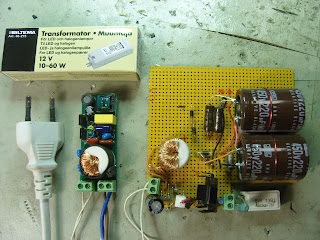 In 2012 bulky power transformers that work directly from the power grid at 50/60 Hz have mostly disappeared. My objective here is to modernize the power supply for a one-tube transmitter in the same way.

The circuit is based on an electronic transformer for LED or halogen lamps. Electronic transformers usually have a minimum power rating, below which they will not start. This one can tolerate a lower load than most and gives out 12 Volts for a load from less than 10 W and up to 60 W. 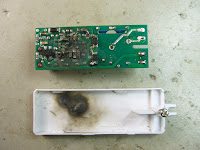 First I was inspired by DL2YEO and his Power Supply for small Tube Amplifiers. His approach was to redesign and rewind the high-frequency transformer (hmm, also a transformer, albeit a tiny one) of the circuit in order to get the desired high and low voltages. It takes some research to find the number of windings per volt and then to fit two secondary windings on the transformer which originally only had a single one. I tried this, but ended up with a burnt, shorted circuit. I concluded that it is too easy to make a mistake in this way.

My second approach was to reuse the small transformer from the burnt supply. I had to wind the original secondary back on it. The transformer is now reversed so the old secondary is used as the primary winding in order to step up the 12V AC. Then with a voltage doubler and filter capacitors I was able to get a DC voltage of 330 V. A series resistor and two 100 V Zener diodes in series gave me the regulated screen supply.

The filament voltage is obtained from the 12 VAC, which is rectified and regulated with a LM317 voltage regulator to give 6.3 VDC. This is shown in the lower part of the veroboard where a load resistor that simulates the tube’s filament is attached to the green terminal block.

Because the whole circuit runs at about 45 kHz, only fast-recovery rectifiers can be used, not the ones that are used at 50/60 Hz. The electronic transformer is from the Nordic retailer Biltema (part no 46-273, sorry no English web page).

I only hope now that this power supply won’t generate a lot of noise for the receiver.