This morning Dave Akerman launched another of his HAB flights from Brightwalton, a few km to the south of me. For the first time since I have been tracking the balloon flights on 434MHz, Dave’s payload was taking pictures and sending them back to ground. Several transmissions from two balloons were available, and as the balloons rose to about 10km, I just tracked their position and altitude.

Then I wondered how I would get on decoding the data and pictures. I tuned the rig to the appropriate frequency and heard an interesting sounding signal. It turned out to be 600baud RTTY. I pressed Auto Configure on DL FLDIGI and was encouraged  immediately to see that data started to be decoded.

Rather pleasingly, on the SSDV Habhub site I noticed my call listed against the pictures that my data packets, which DL FLDIGI uploads to the server, had contributed to. SSDV seemed a very robust protocol and quite often, I would get a solid data packet from the image, where perhaps a position report had failed.

I had not tried SSDV before, but it turns out that if you press S whilst in DL FLDIGI, you can see the image that you are downloading, Here you can see one of the better images that I decoded, when the balloon was around 30km high. 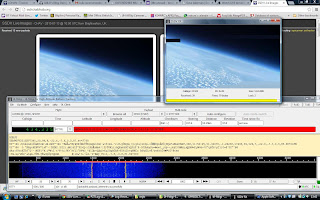 The picture to the top right is the version that I had decoded, with the version on the left the one with everyone’s packets contributed.
Once the balloon had burst and was falling to earth, the doppler made the 600 baud RTTY hard to decode for a while, but I was able to start receiving pictures once the payload had slowed somewhat.
An interesting experiment – I like the look of SSDV!
Tim Kirby, G4VXE, is a regular contributor to AmateurRadio.com and writes from Oxfordshire, England. Contact him at [email protected].