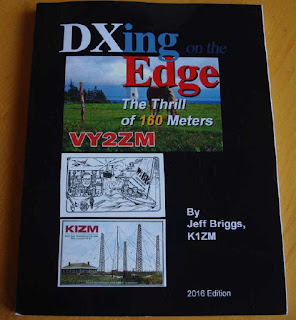 It was a week of 'threes' when it comes to the 'gentleman's band'. The first was last weekend's CQ 160m CW Contest ... exciting as always, with propagation from VE7 land favoring the southeast. At times, signals from the Caribbean were exceptionally strong while it was a struggle on both nights to work eastern W1's. As usual, I entered in the low power division with a power limit of 150 watts, spending 8 hours in total and finishing with 249 contacts in 51 sections / 8 countries. Other than the odd State QSO Party, the 160m contests are about the only ones I enter these days.

The mail brought my next two Topband delights. The first being a copy of Jeff Brigg's (K1ZM / VY2ZM) spanking new "DXing on the Edge - The Thrill of 160 Meters". This is the second edition of Jeff's original classic which was published twenty years ago in 1997.

The new second edition carries all of the original content (except for the CD) along with four new added chapters. Although the original material is dated, it is still just as valuable and informative as it was when first published. Highlights of the book include chapters on:


If you have any serious interest in DXing on 160m, you will find much inspiration in Jeff's book. The descriptions of many stations, from the simple to the extreme, highlight the fact that almost anyone can achieve DX success on the 'Topband' with a little perseverance and some thoughtful station design.

When it comes to Topband DXing, things have changed a lot since 1997 ... as Jeff indicates in the new section, his main reason for releasing a second updated version:

" ... was to publicly review the technical advances that are now available to the modern 160M DX'er. In this way, everyone - old timers and newcomers alike - would have the time to "get ready" for some great years that will be coming soon on Topband. So get going ... gear up ... start making plans now to be part of the action. It is probably going to be a wild ride ahead and a lot of DX'citement for those who are up to the challenge!"

If the coming solar low years are anything like the last previous low, we are indeed in for some fun times!

Jeff's book can be purchased through numerous outlets including Amazon and Chapters, often with free-delivery.

The third Topband event, again via the mail, was the arrival a new 160m QSL. 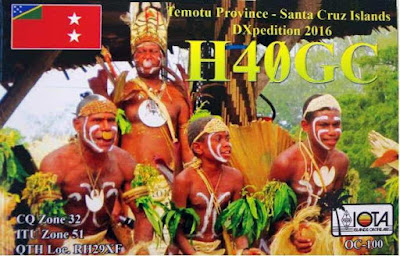 The sunrise 160m CW contact with H4ØGC, Temotu, was confirmed country #159 for me on Topband, with most of these being worked from here on Mayne Island using a half-sloper and an aging 500 watt amplifier with a pair of original 572Bs.

If you've not been on 160m and are keen on new operating challenges, Topband may be the place to begin ... along with a copy of Jeff's inspirational 'Topband handbook'.