It sure has been warm here since last Sunday.  This morning I Tweeted that you know your in for a rough day when you wake up at 6:30 AM and the air conditioner has already turned itself on …… and we keep the AC set on the kind of high side here at the W2LJ household.  We try to keep the house comfortable, but not like a meat locker.  So when the cooling turns on, it’s already pretty warm in the house.

So when the weather is like this, what does a sensible QRPer do for lunch break?  Does he stay inside the nice, cool office building, kick back and maybe read for a while while eating his sandwich?

Well, maybe that’s what a wise, sensible, pragmatic QRPer does, but none of those descriptions fit me, so I headed out to the parking lot to get the Buddistick on top of the Jeep and the KX3 on the air!  When I got out there, I set out the thermometer that I brought along from home.  I set it in a shady spot, out of the direct sun, and let it sit while I operated.  The plan was to check it and snap a photo of it, after I broke the station down, but before I headed back inside.

My first band of choice was 17 Meters as it has been really good to me over the last months of lunchtime operating. However, there must have been some kind of device turned on in the Engineering Building at work, because I had terrible electronic pulse noise from 18.068 to about 18.083 MHz.  The KX3’s noise blanker (which is the best noise blanker I have ever used) put only a slight dent in the noise.  The incoming signal would have had to have been 599+ to overcome that racket.  The funny thing is that right at 18.083 MHz, it was like someone turned off a light switch and the pulse noise quite literally vanished.  The problem is that on 17 Meters, the majority of DX stations will be found on the lower portion of the band, so I decided to QSY.

On to 15 Meters!  I didn’t hear a lot of signals on the band, so I decided (for whatever reason) to do something I hardly ever do.  I went to the QRP watering hole of 21.060 MHz and actually called “CQ QRP” for a bit. Normally, the only time I do that is during a QRP Sprint or contest, but for some reason unbeknownst to me, I decided to try it today.  And strangely enough, I got an answer.  The answer came from Reiner DL5ZP.  The QSO was a tough 2X QRP affair, as QSB was fierce, but we got in an exchange of the basics.  Afterwards, I had to wonder if I was taken in by a “slim” or a “pirate” as they are better known.  DL5ZP does not appear on QRZ.com. He does kind of halfway show up on QRZCQ and DX Summit and even Google, but by not coming up on QRZ.com, I have to wonder if this was legitimate, or what.

After the QSO with DL5ZP, I went to the 20 Meter QRP watering hole and did the same thing.  This time I was answered by W7USA in Arizona, and we had a very brief QSO.  Band conditions did not seem to be the best this early afternoon.

So after I put everything away, as far as the station goes, I went and fetched the thermometer from it’s shady spot.  Here’s what it indicated: 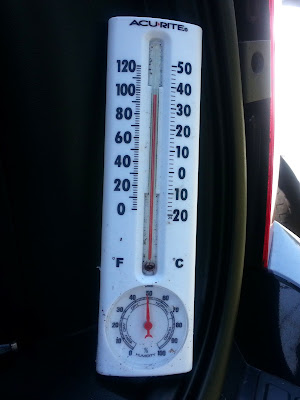 About 96 or 97F (36C) with just under 50% humidity.  Hot enough for me to almost burn my fingers on the magmount when I lifted it off the Jeep, but not hot enough to keep me inside.

Band conditions were much better tonight for the 20 Meter QRP Foxhunt.  I managed to grab two furs tonight by working John K4BAI in Georgia and Jay KT5E in Colorado.  But I have to admit that as soon as I bagged both pelts, I shut the station down and disconnected the antennas.  The weather service is saying that this 6 day heat wave may break tomorrow afternoon with possible severe thunderstorms anytime from tomorrow afternoon into Saturday morning.  I don’t need to be driving home tomorrow afternoon, in the middle of a bad boomer, only to be worrying that I forgot to disconnect my aerials.

By the way, it’s now 11:00 PM here. The sun has been down for about 2 1/2 hours, and it’s still 84F (29C). Those are probably going to be some pretty powerful thunderstorms to break the back of this hot spell.