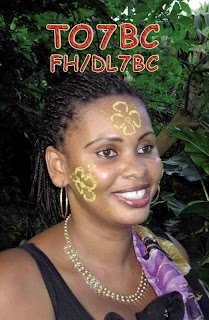 A good day today. Not much operating as I had to install a new PC monitor here in the shack and then a new Freetime Freesat receiver down in the living room. It’s one of the new ones with WiFi support so I don’t need to run a network cable down to the living room which all existing boxes have required.

After that I came up to the shack to see if I had installed any new QRM generators. Switched to 10m PSK31 and heard a single solitary station – TO7BC  from Mayotte!

I’m not a DXer but this signal on its own in the clear was too much to resist. It took about 15 minutes to break the pileup. I couldn’t hear any other callers so I used XIT to dial in 0.5kHz up and hoped for the best. After a while with no success I decided to go up another 100Hz and he came right back! I must have been the only station who received a 579 report.

I shall check the website later to see if I got in the log. I will also have to find out where Mayotte Island is! I don’t often get to work DXpedition stations so I’m quite pleased with this afternoon’s work. I’ll check for QRM generators another time.