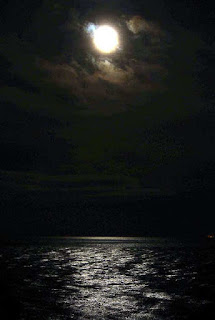 I couldn't hold out any longer! The sight of a full-moon rising over the ocean a few nights ago was just too difficult to resist ... I would have to spark-up my 2m mini moonbounce system and see what was happening.


The QSLs are now all in from my last eme adventures in the early summer, bringing my total number of contacts to 80.

My simple system uses a single 9el m2 yagi and an old third-hand 140W brick amplifier and built-in GaAsFET preamp. The yagi is mounted atop my 50' tower and fed with about 100' of RG-213 cable, along with its 2+ db of loss.

Looking directly out over the saltwater of Georgia Strait seems to provide the near theoretical 'sea-gain' of 6db, making the little yagi behave more like a box of four in terms of gain. As well, there are no noise sources when pointing out over the water at the rising moon. Not being able to elevate the antenna means 'moonrises' only, and usually gives me about 90 minutes per session before the moon gets too high.

Last night was surprisingly active, mostly with U.S. stations, as it was still early evening here but there were also several early-rising Europeans on the band.

One outstanding signal was from a station I had not worked before, OK1DIG, who was running a 4 x 15 element yagi array. I called him a few times when his signal was easily audible (-15db) but he seemed to only hear me later, replying to one of my 'CQ's, with his signal starting to drop here. This is often the case on 2m eme as a reciprocal two-way path is not always the rule. He was my only contact of the evening (#81) but also heard were K9SLQ, UT3MD, PA3FYC, all of whom I have yet to work.

With another favorable moonrise tonight, albeit over an hour later, another go will be hard to resist!
Steve McDonald, VE7SL, is a regular contributor to AmateurRadio.com and writes from British Columbia, Canada. Contact him at [email protected].