Three Summits in the Wichita Mountains

14 January 2014 | by Mike AD5A  |  Share |  Tweet |  Leave a Comment (0)
This trip to the Wichita Mountains in SW Oklahoma was not a firm plan. Unlike many of my SOTA expeditions, I only carried my radio gear in case I was able to use. Unfortunately, I was in Ft. Worth, Texas to attend the funeral of my Aunt and as always, at funerals and weddings, there are always lots of family and friends to catch up with. I figured that the reunion might last through the weekend. However, after the funeral on Friday most of my relatives dispersed back to their busy lives.  I suggested to Cris, my XYL, that we sneak off to the Wichita Mountains for a SOTA date. She agreed, so we set out for Lawton, Oklahoma, which is a 2.5 hour drive from where we were. Upon arriving in Lawton around 10:00p.m., I opened up my iPad and put together a plan.

I had lived in Duncan, Oklahoma for eight years in the '80's and early '90's and had visited the Wichita Mountains multiple times with my family and our Boy Scout Troop, but never with summits in mind. So the must do summits in the Wichitas are Mt. Scott and Elk Mountain. Mt. Scott is a drive up and Elk Mountain is a nice 1.1 mile hike, one way. I knew if I started early, three summits were doable, maybe even four. But which one would be the third? I remembered KC5CW and KD5ZZK operating from a four point summit not far from Mt. Scott, so after a little research, Mount Cummins was added to the list. Below is a report on the trip.

This is an easy summit. The weather was on the chilly side with temps in the mid-30's when we started out. Upon arriving on the base of the mountain, there was a squad of army soldiers getting ready for a run up the mountain, something that would appeal to Fred, KT5X, but I was happy to drive up this one. At the summit, there was only one other car, so I had a pick of operating sites. I elected to get out of the wind and down a ways from the summit. 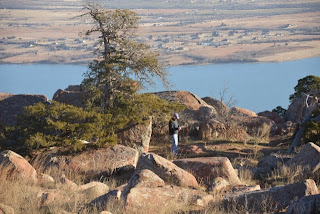 Operating Site on Mt. Scott
The views from Mt. Scott are fantastic, mainly because the mountain rises above the relative flat plain of grasslands. Lake Lawtonka is part of the backdrop. But it was a little chilly. The tree in the foreground of the picture is what I used to support the end of my antenna which I then brought to the operating position down my carbon fiber fishing pole. 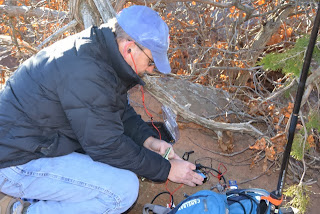 Operating on Mt. Scott with MTR
Signals were good and I made 18 QSO's on 20 meters. When I QSY'ed to 40m I didn't get spotted by RBN so I self spotted. Nothing. I wrote it off to poor propagation. However, as I figured out on the next summit, changing bands on the MTR requires changing three switches, I had only switched two and wasn't putting out a signal, so my apologies to the 40m chasers. 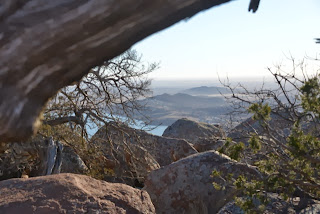 View From Mt. Scott
While I was operating I heard some cadence based singing. I thought my wife was listening to something on her iPhone, but it was the army squad. Not looking as fresh as when we saw them at the bottom, but the worst was over.
Elk Mountain W5O/WI-007
Elk Mountain 8 or 9 miles west of Mt. Scott and it is a great SOTA summit. It has an easy to follow trail that isn't too long (1.1 miles one way) and great views at the top. This would be a great summit to practice on to get prepared for higher elevation, longer climbs. My wife and I made the climb in 30 minutes.
The trail head is at the Sunset Picnic Area and begins where the bridge crosses the creek. By the time we got on the trail the temps had warmed to the upper 40's and the sky was clear, a beautiful day. The climb is straight forward and the summit is large so you have a lot of room to set up. However there no substantial trees on the summit, so this necessitated a different set-up for the antenna. I set up a little below the summit and used an inverted L configuration, running the wire up the pole and then letting it slope down from the top of the pole. 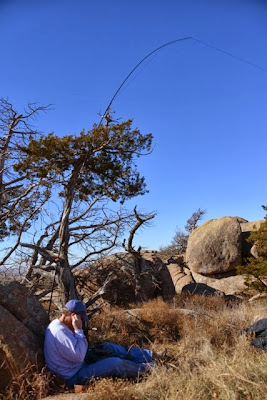 Operating on Elk Mountain
Propagation was good and signals were strong. I received several reports greater than 559 and several 599, so everything was working. I made 22 QSO's on 20m and 4 QSO's on 40m. Included in the log was S58AL.
Toward the end of the activation, a group of boy scouts gathered to watch. I gave them an impromptu lecture on ham radio in general and SOTA in particular. They were very attentive. I told them that the internet was hard wired, but ham radio was magic. 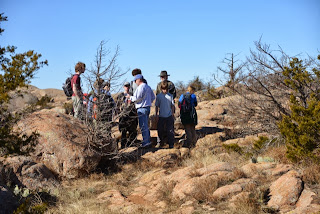 Cris captured my impromptu talk with the Scouts 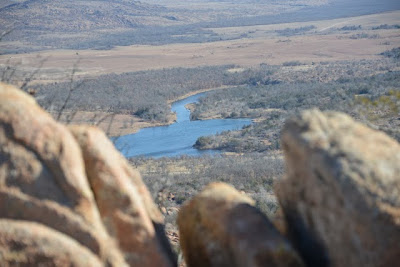 View from Elk Mountain
Mount Cummins W5O/WI-031
Mount Cummins is also a relatively easy summit, however finding the way to the top was a little more of challenge than I expected. My GPS took me to the wrong side of the mountain. The cell phone tower is the landmark, so I kept driving until I found the road to the tower. The cell tower site is in the activation zone, however, I wanted to get up on the summit to get the antenna deployed, so I did  a little bushwhacking. 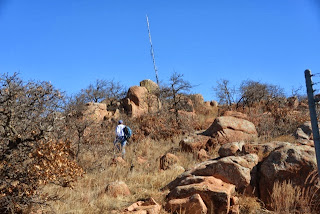 On my way up Mount Cummins
There is a lot of scrub oak on the mountain that makes getting to the top a little more challenging than you would think. In the picture above, the cell tower fence can be seen in the right. The antenna above me in the picture must be a repeater antenna. The summit is relatively large, I set up on the summit ridge. 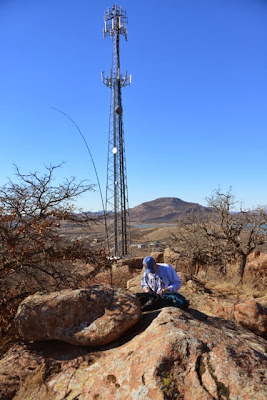 Operating Position on Cummins
You can see the beautiful day, with clear skies, temps now in the lower 60's. I made a total of 27 QSO's with all but four on 20 meters. 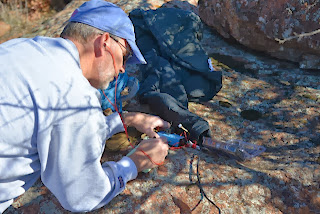 Running the Pile with the MTR
This was a fantastic day of SOTA fun. I earned 22 Activator points, enjoyed a beautiful day outdoors and enjoyed a SOTA date with my wife Cris. She loves photography, so this trip gave her some material and a good excuse to use her camera.
This is the first time I've done three summits in a day. My equipment performed well and I received better than average signal reports. I don't know if it was simply propagation or the inverted L/sloper configuration was better. At any rate, it was fun.
I had planned on maybe doing a fourth summit or maybe getting up early Sunday to do one more before driving home to San Antonio. However we received news that our daughter-in-law, who is six months pregnant, was having an emergency appendectomy, so we made the 7.5 hour drive home instead. Both mom and baby are fine.
Thanks to all the chasers. This SOTA stuff is fun.
Mike Crownover, AD5A, is a regular contributor to AmateurRadio.com and writes from Texas, USA. Contact him at [email protected].