This weekend it was DX with the Alexloop!

20 October 2013 | by Mike VE9KK  |  Share |  Tweet |  Leave a Comment (6)
With getting most if not all of my "to do list" done it was time once again to swing the Alexloop into action and have a nice late afternoon of ham radio and relaxation. Setting up the loop has become faster for me I'm getting the hang of the in's and outs of the loop. I also am able to tune the loop in less than 20 seconds and be up and running on different band segments. The SWR is anywhere from flat to 1.7:1 and the band width is very good and retuning is not needed unless 20 khz changes are needed. This weekend the Worked all Germany CW contest was going on so I wanted to be a point giver for the contest. With 5 watts, my KX3 and the Alexloop in the living room I was able to contact the following  all on 20m:

I did try dropping the power lower than 5 watts but is was just not doing the trick. I then was on 30m and WA3SCM Dave was calling CQ. I came back to him using 5
watts. I was at times in and out with Dave but he was in P.A and that's off the backside of my loop antenna. Dave was running a long wire with 100 watts and all was going well until my KX3's batteries decided to die! The KX3 just shut down and my lesson was learned in that I should be monitoring the voltage on the KX3 (via it's display) and I would had known it was due time to change over to my external battery supply. I did go upstairs and get the extra battery but it was too late as Dave was gone. I did email him and explained what happened and on Sunday he emailed me back. He was wondering where I had gotten to and did tell me that he was very interested in the Alexloop as he has worked with lots of different types of loop antennas.
I was able to spend some time on the radio today (Sunday) and I again tried 10m to see what was happening.....it turned out that 10m was good to me today. I was only able to make 2 contacts but they were sweet ones! 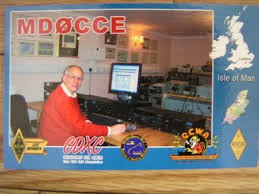 I was shocked at both these contacts two very nice and sometimes rare areas and I did both in one day! If I get the time this evening I will try some more radio time but if I don't get around to it I am very happy with the two contacts I did make today.
Mike Weir, VE9KK, is a regular contributor to AmateurRadio.com and writes from New Brunswick, Canada. Contact him at [email protected].

6 Responses to “This weekend it was DX with the Alexloop!”