4 September 2015 | by Steve G1KQH  |  Share |  Tweet |  Leave a Comment (0)
You can wait in for some parcels for days, your promised they will be there but they never quiet arrive when you expect. I predicted the Wouxun would arrive from Martin Lynch & Sons on Wednesday, I told the XYL to be around as I would be out working, she had just got back in time from the hairdresser. Arrival, there it was 11:10am delivered by UPS. 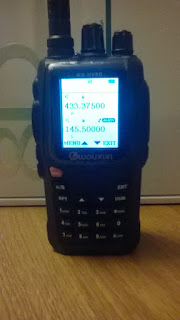 There is a lot of technical info out on there about this radio, the best, if you want a fair and unbiased review, get down to Hans PD0AC who has tested many Chinese radios with the proper test gear to a professional standard.

What do I have to say about it so far:

Like all new toys one is  always eager to have a play, The radio came complete with external charger, wrist strap, belt clip, dual band antenna etc. A quick read of the well detailed manual might put your head in a spin, plenty of stuff to note. But like most of these Chinese radios once you understand the menu system it is easy to get to grips with. I slided the 2600mAh battery on the back of the main chassis case, it snapped and locked into place with a firm click. This made the radio feel quite weighty and rugged, I only have small hands and they only just made it around the body while holding it firm.

Switching on, we were in business, a clear bright display made a change from the simple plain two line LCD HT's I have. 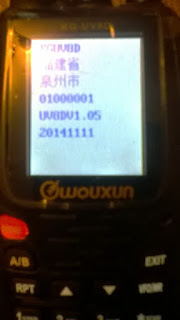 A quick test to check the internal firmware version, is achieved by holding down the 3 key while turning on the radio. Mine showed Version V1.05, which I understand is the latest which is shipped with the radio during production. * Note there is no user way of upgrading the firmware from an external PC..


2m and 70cm are always very quiet around here, but I was lucky my friend Gary M0TTO was just signing with someone on the 2m band over at Lichfield QTH. I pushed the PTT and gave him a shout,  he came straight back to me, he reported the audio sounded really nice and crisp! I said what was the signal strength like? He said end stop! But of course it would be, he only lives about 6 streets away, I turned the power down to Low, still end stop..The  received audio sounded good, and plenty of volume still left in the wick should I  have required a bit more. In the middle of the QSO it suddenly stopped TX, I was still pressing the PTT, I released the PTT and then pressed it again, it started Transmitting again, but shortly after the same thing happened. I was a bit curious at first, but I remember these radios have a Time Out Timer "TOT" Menu 06 this was only set at 60 secs, I increased the time out period and it stopped the annoyance.

Conclusion: I have always rated Wouxun as being the better of the quality end of production from China, I feel this radio brings them into a new era and still keeps them at the top! Certainly they have had problems in production like any other, but I am sure the Japanese big three feel the threat. So far I am pleased with what I have bought at the price of £69 inc UK delivery makes it an excellent buy. I still have to program it up for repeaters etc with the free software. Which can be downloaded from Wouxun or you can use the free Chirp multi radio programming software, which also supports this radio in a basic format at the moment.