The TR9500 and her sister come to stay 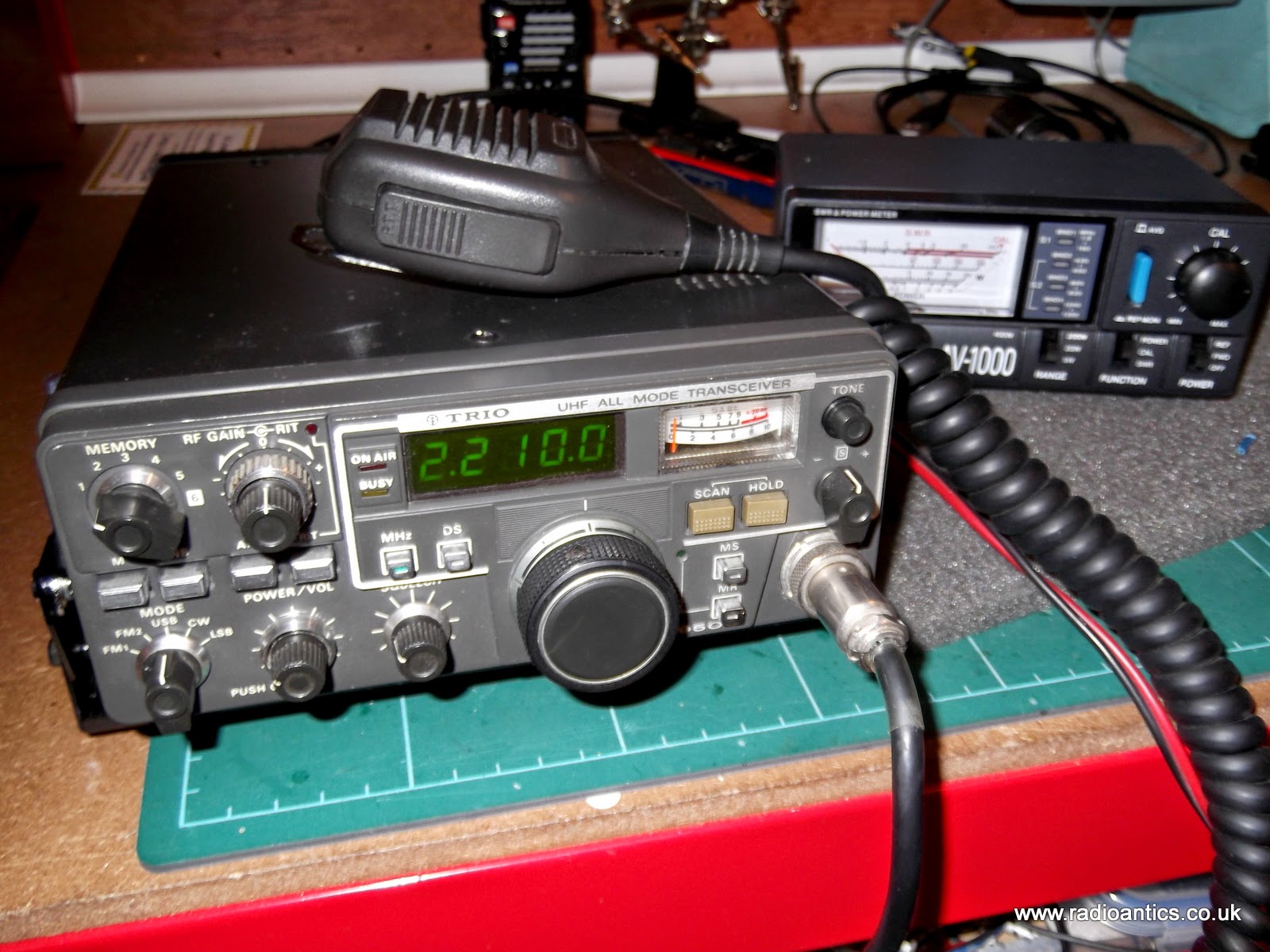 It is the Trio/Kenwood TR9500 that I repaired last month for a fellow club member. Having no transmit audio I'd replaced a faulty transistor in the microphone pre-amp. Subsequently it's owner reported it was still misbehaving and locking up in transmit mode.

I'd offered to give it another look but the owner decided to cut his losses and wanted shot of it. He had just purchased a nice new radio at the National Hamfest and was also selling a 2m Trio/Kenwood TR9000 multi-mode set to make some room.

I liked the look of these pretty sisters and got both of them for a very reasonable price, the TR9500 costing just £10 in lieu of the previous repair work. I collected them at the weekend and got around to checking them out last night. 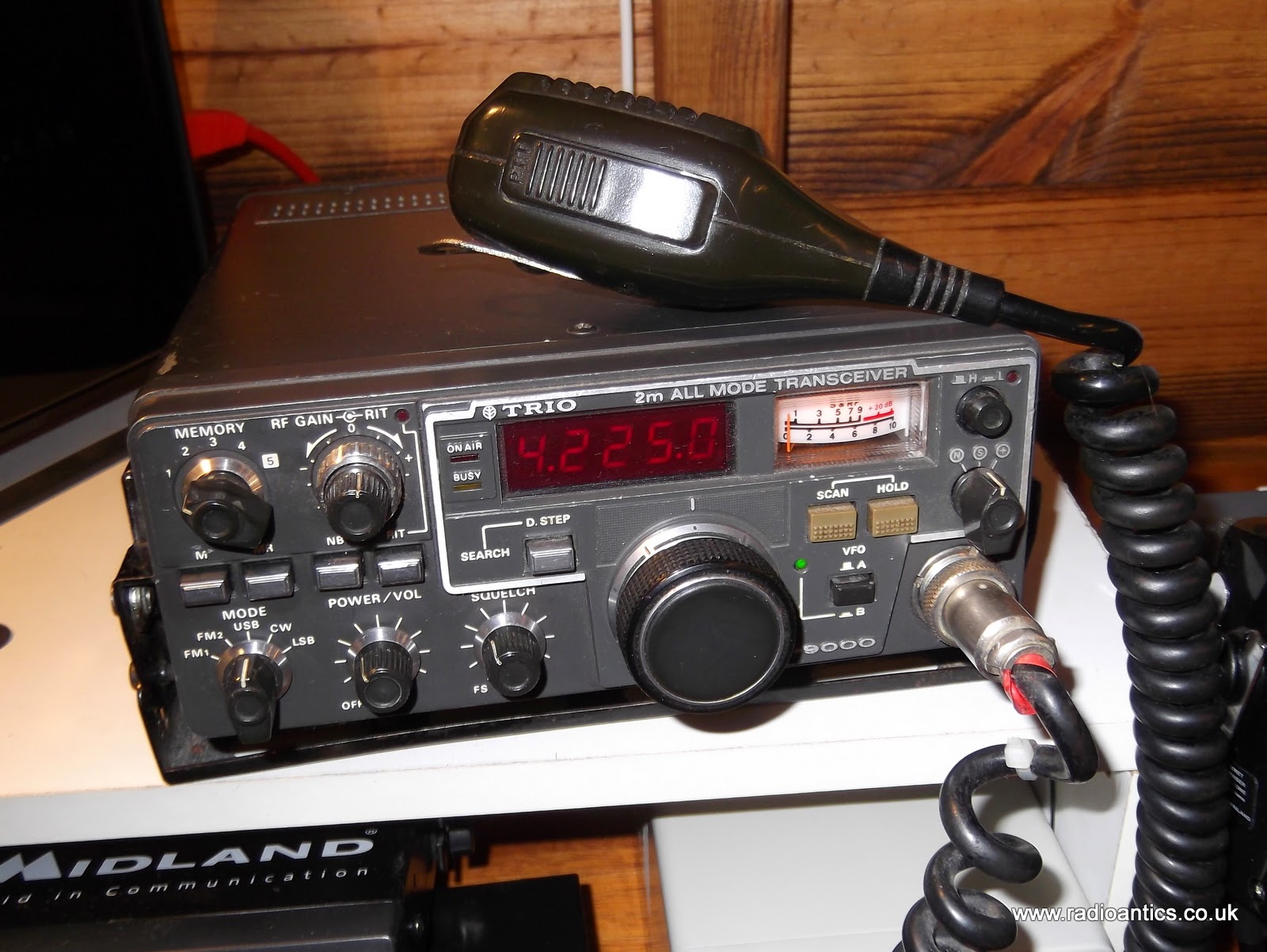 The TR9000 is a lovely compact rig, the case has the odd scuff but the front is in good condition and has cleaned up nicely. I just need to attend to the microphone plug as it wearing the ubiquitous piece of brightly coloured insulating tape. It is fully functional and I made a few contacts on it during last nights 144MHz UKAC. It is nice sounding and seems to have a good sensitive receiver.

The troublesome TR9500 has been back on the bench and connected to a dummy load and my X-50 dual-band collinear and I cannot find anything wrong. The ALC 'issue' I suspected was a red-herring, the audio does cuts out and the S-meter goes to S9 but only when the RF gain knob is turned to minimum not maximum as I'd thought, the same thing happens on the TR9000.

It is entirely possible the fault reported by its previous owner is intermittent (a bad joint, sticky relay etc) It is also a possibility that RF was leaking back in the rig causing it to lock up. I plan to use it in anger maybe during next weeks 432MHz UKAC especially if the receiver proves as sensitive as that in the TR9000.

As I mentioned the National Hamfest took place recently and since it is local to me I decided to go along on both days. The Friday was by far the busier day with lots of sellers in the outdoor flea-market with a genuine 'buzz' which seemed lacking on the Saturday, there were a lot less sellers outdoors.

The main hall left me a bit underwhelmed, the layout seemed a bit messy and some areas were cramped while others seemed to have acres of spare room. It was also very hot in the main hall especially on the busy Friday, however it was still an enjoyable couple of days and met up with some fellow tweeters and operators.

My purchases were modest and as well as the usual connectors and cabling I picked up a nice as-new 7A regulated linear power supply, a foot switch, a replacement satellite Quad-LNB, a very sorry looking 70cm linear amplifier and picked up one of those lovely Czech morse-keys for when I brave doing the code!

I also picked up this little 2.4GHz B/W video monitor for a whopping £1 and it works a treat. I have a number of 2.4GHz wireless security cameras (purchased back in 2009) intended for a PC-based PVR CCTV system but the whole PC system proved unreliable so they are sitting idle. This little monitor can receive on the four standand channels and as a bonus runs off 13.8V so ideal for sticking in the car and driving around the local housing estate eavesdropping on other similar cameras - I am joking of course!


The very sorry looking 70cm linear amplifier is a Tokyo Hy-Power HL-60U. I found it hiding away in a box of junk on one stall and after a bit of haggling got it for a fiver! From its appearance I really didn't expect it work, especially since the warranty seal had been broken. I wasn't too bothered about the power amplifier I was far more interested if the built in GaAsFET pre-amplifier still worked. 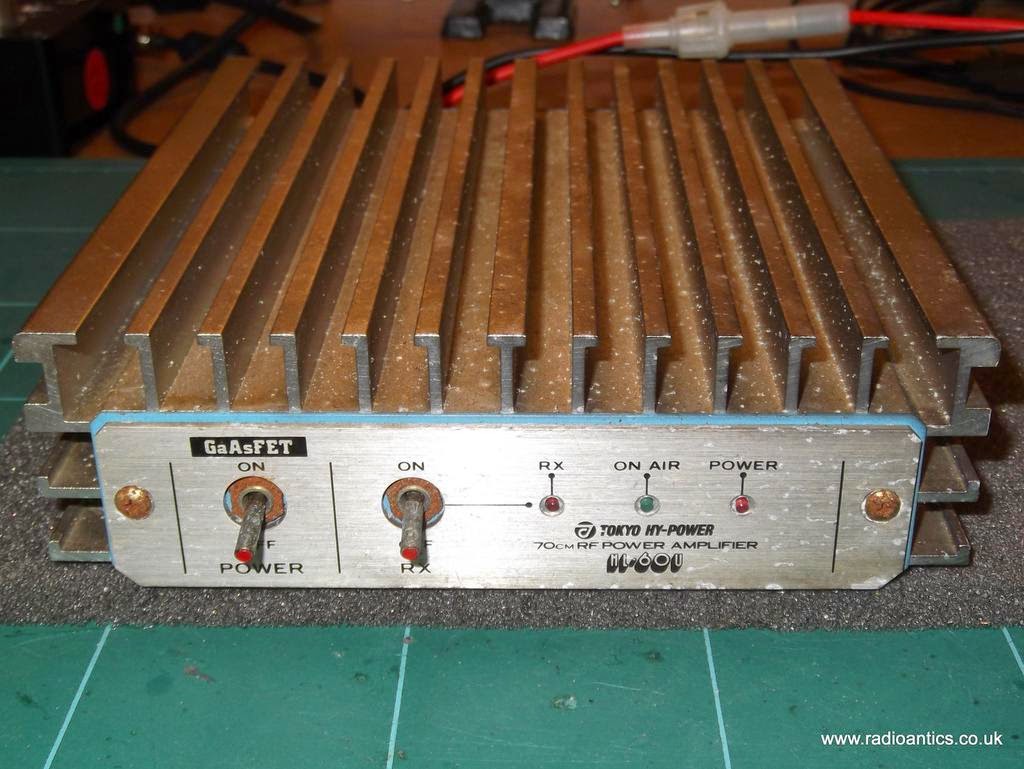 Getting it on the bench I opened the case, expecting to find it plundered and butchered and was pleasantly surprised to find the insides looked almost pristine. I think the main PA transistor may have been replaced, but while it looks a bit messy the flux resin around its joints looks the same as other areas of the PCB so not sure. It looks slightly different internally to some another photographs I found on line and I have searched the web for a manual and schematic with no joy. Tokyo Hy-Power went bankrupt last year and the website and precious data downloads have all but disappeared. 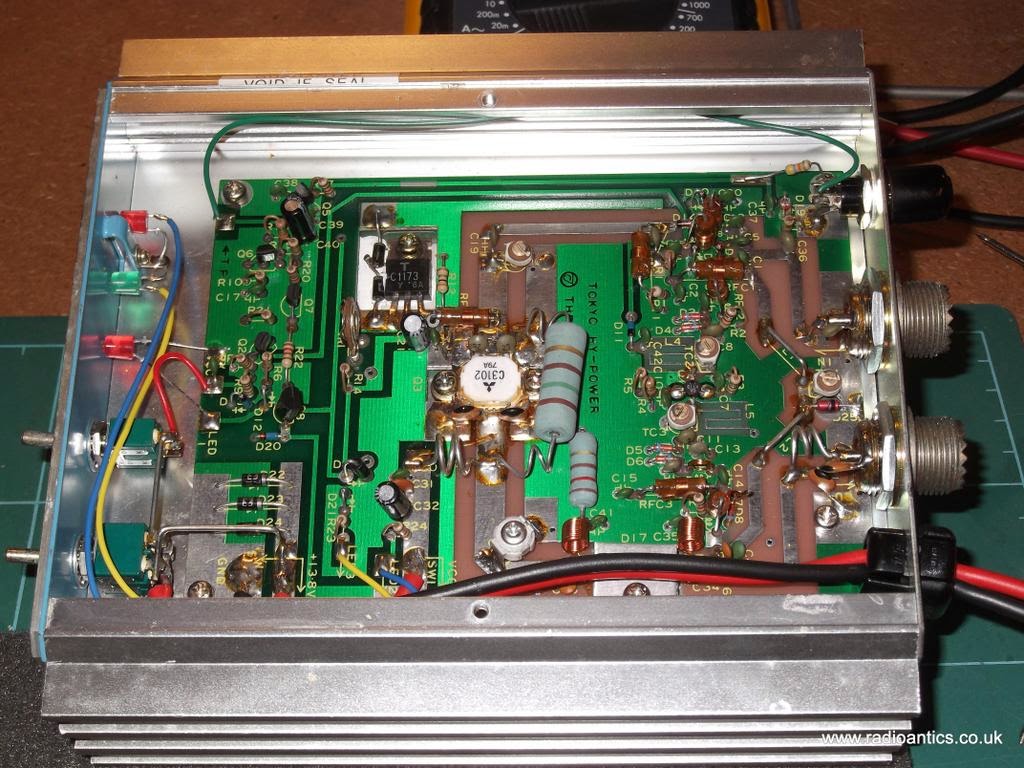 As it looked intact with nothing missing I connected up the dummy load, power meter and fed the input from one of my Baofeng handhelds. It powered up and was giving 15W out for a measured 3W in with no distortion on the audio, so far so good. However after connecting up the FT-857D and slowly increasing the input power is became apparent that 15W seemed to be about the limit of its output, not the 60W as promised.

Removing the dummy load and putting it on the X-50 antenna I had a listen around for weak stations to checked the operation of receive pre-amp and it worked! Should prove useful for the 70cm contests.
Andrew Garratt, MØNRD, is a regular contributor to AmateurRadio.com and writes from East Midlands, England. Contact him at [email protected].

One Response to “The TR9500 and her sister come to stay”