20 April 2013 | by Mike AD5A  |  Share |  Tweet |  Leave a Comment (0)
So I just finished writing a post about frustration being ultimate reason that many hams can't stick with QRP. Many have high expectations, some  are unreasonable expectations that can't be met. When I last wrote of this I was declaring my optimism. Well, I have crossed over into the state of frustration.

Years ago I built a Rockmite. It is a fun project. When I finished it, I didn't take the time to put the antenna connector on it or the dc plug, I simply use alligator clips to get everything working. I remember calling CQ for a few minutes made a QSO, which the station on the other end actually recorded to let me know how my 400 mw sounded. Pretty cool and this milliwatt stuff isn't all that bad.

While cleaning my shack a few years later, since I had never used the RockMite since that first QSO, I threw it away. The day after the garbage man took it I'll admit I was a little remorseful. Ever since I have been watching the auction sites for a Rockmite to replace it. I didn't want to go to all the trouble to build another one, I just wanted one to have and play around with occasionally. The other day that replacement arrived at the house. I hooked it up and called CQ for an hour, some of you may have seen my spots on QRPspots.com. A few guys tried to hear me but couldn't. Today I came home from work and hoped to make a QSO with a local during the afternoon and called CQ for another hour. Lastly I tried again tonight. No joy. Probably 2.5 hours of CQing with the Rockmite and no QSO. So it is a little frustrating. What else could I have done with my life during those 2.5 hours. After calling so fruitlessly with a QRPp, rock bound rig, the KX3 now looks like a QRO rig.

Oh well, I'll try it again. QRPp is a little like fishing, they might not bite today, but they might be tomorrow, at least that is the optimistic way to look at it. 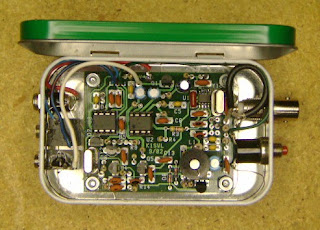 RockMite
Mike Crownover, AD5A, is a regular contributor to AmateurRadio.com and writes from Texas, USA. Contact him at [email protected].