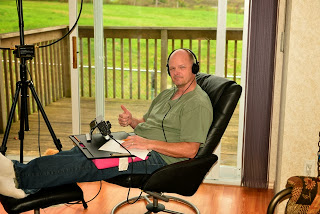 Things around the house are slowly getting packed away but the ham radio bug still bites. It's true what they say....."you don't know how much you miss something until it's gone.....or semi packed away" Ham radio is not gone from VE3WDM, the antenna may be sold and gone, coax all rolled up and boxed. The Elecraft K3 sits idle at the desk but all is not lost as the KX3 and Alexloop are calling my name!! On Saturday once our Thanksgiving preparations  were going smooth...the turkey was in the oven and the side dishes were slowly cooking it was time to feast on some missed ham radio time. The night before, I charged the batteries in the KX3 having them ready to go if the opportunity came about. It did on Saturday afternoon so I setup the Alexloop in the living room and fired up the KX3. It sure was nice to hear some atmospheric noise and even the woodpecker QRN from some offending appliance was ok as well. (the KX3's NB and NR took care of any offending interference) 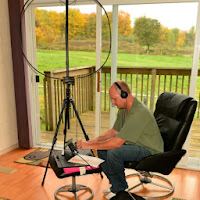 I had been reading about some hot openings on 10m's from some of my blog buddies but I found 10m to be dead. I ended up hanging around 20m at the QRP watering hole. My power was reduced from it's normal 5 watts to 3 watts. Julie was on her Mac beside me and since our living room TV had been sold it was a Sony boom box radio entertaining her with tunes. The Sony radio along with it's antenna was only 10 feet from the Alexloop anymore power than 3 watts could be heard over the radio. The way Julie see's it CW is NOT music to the ears and it's much better to be on the radio and have Julie happy thus down went the power.
As for contacts I only made 2 short contacts as I did not have much time and was up and down checking on dinner. I was able to make it into Utah to WA7LNW and N3PDT in Missouri, not much but from the ground floor, indoor antenna and 3 watts I was happy with the contacts. I kept tabs on my signal using the Reverse Beacon Network and it showed only U.S stations were copying my signal. I was on again Monday evening and could hear PV8ADI from Brazil at S8 but I was not able to make contact with him.

The KX3 now is resting on the radio desk and the Alexloop is away in it's carry case until next time. I was please to get this short radio time in and the results were pretty good as well.
Mike Weir, VE9KK, is a regular contributor to AmateurRadio.com and writes from New Brunswick, Canada. Contact him at [email protected].