25 August 2018 | by Steve G1KQH  |  Share |  Tweet |  Leave a Comment (2)
QRP Labs started design and producing small QRSS/WSPR Beacon transmitters some years ago, along with a complete set of addons and other accessories that have evolved as the project progressed.  Last year, owner and designer of QRP Labs, Hans Summers, took his small company to a new success level with the launch of the QCX 5W Single Band CW/WSPR transceiver. Which has currently sold to date well over 5500 units, over various HF bands.  A fantastic project because it crammed so many full features into it's small pcb, including its inheritance from the WSPR Beacon, but with full frequency agility, CW decoder and included was a unique inbuilt test generator to aid alignment, never seen on such a low price product before.

The QCX has proved a QRP Labs British success story for such a niche product in it's own right.

Of course Hans (G0UPL) wasn't going to rest on his laurels and an SSB radio had been rumoured to be on the design board for quite sometime. Infact he had told me at the begining of this year, these projects takes a while before they hop off the design board and reach fruition to complete into a working project.


So it wasn't no surprise that G0UPL has again used YOTA 2018 (Youngsters On The Air) hosted in South Africa this year, to pre launch the QSX a 10 Band HF SDR project. You could say that YOTA is used like a test bed to iron out any last minute technical and constructional difficulties, found, or encountered, before he begins to put the kit into full time mass production in a couple of months or so. Most of what the new SDR single/10 band rig will do and it's outlined specification, is set out on his website here: QRP LABS - QSX 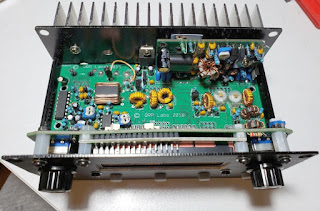 I was fortunate enough to have a short electronic messaging chit chat with Hans earlier this week, and he was able to put me well in the picture with one or two technical details about the project.

While emissions and spurs are all the the talk of the town at the moment on another QRP project from another company not associated with QRP-Labs . The QSX will have "no" spuri issues!

Using 2 IRF510's in the QSX's linear HF PA, Hans reports the performance is excellent! The PA module being driven by two BS170's in Push Pull, giving an overall gain of around 26-28dB. This concludes in easily producing 10W across all HF bands using 12V.

Gain Flatness is better than 2dB across the spectrum between 2-30MHz. It is about 4dB down at 6m and 8dB down at 4m.Thus the same drive level that produces 10W across the HF bands gives a very useable 5W on the 6m band.

Hans also reports the linearity is excellent too!

Harmonics are low even before it even enters the LPF: 80m measurements 2nd harmonic is at -38dBc, 3rd -31dbC Making it very easy for the LPF to clean up what remains and make it a very high performance radio.

All this is acheived using cheap Chinese IRF510's 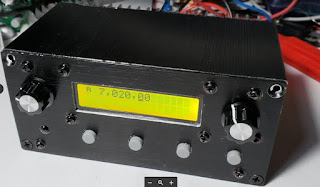 The heatsink is BIG!! Testing, it ran at 10W output for 1 hour continous 100% duty cycle, no forced air or cooling, the heatsink temperature was still reasonable about 40C over ambient.

All tests resulted in no failure.

2 Responses to “The QSX SDR HF from QRP Labs”