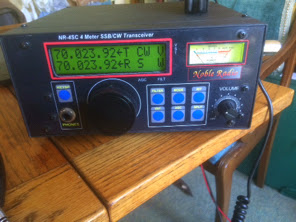 I was very conscious, having been playing with the rig that I really hadn’t put it on any sort of decent antenna. Well, I still haven’t, but at least it was something horizontally polarised!

A few weeks ago I ordered a Moonraker 70MHz HB9CV. I wanted to have an antenna that I could use for some meteor scatter and I was also very interested to see what I could hear over tropo paths with a simple antenna.

Today I had the chance to put the antenna together, which didn’t take more than about 30 minutes. I mounted it on a spare pole in the garden, held up by a stepladder, so the HB9CV was probably no more than about 8 feet above the ground.

Of course, the first signal that I listened to was the GB3RAL beacon, just a few miles away from me. I was pleased to see that the signal strength varied substantially as I rotated the antenna – anything from about S8 to S1, so the pattern of the antenna was reasonable, despite the low mounting height.

Next I listened for the GB3BUX beacon. I heard nothing and a quick look at the Beaconspot database suggests that it may be off air. Then, I pointed the antenna to the south west to listen for GB3MCB in Cornwall. Very pleasingly, I was able to hear it, just out of the noise, peaking up every few minutes. This may have been tropo or it may have been aircraft scatter. Either way, I continue with my assertion that the NR4SC has a nice quiet receiver. I’ve not, yet, tried this path with the Spectrum transverter. Interestingly, I have not heard GB3MCB on 144MHz very often. I’ve always assumed that is because of Faringdon Folly – a hill to my south west a mere 4 or 5 miles away. So it’s interesting that the path works ok on 70MHz, even with a low antenna.

I also listened for the GB3ANG beacon near Dundee in Scotland. I cannot be certain whether I heard it – certainly nothing concrete, but I’ve a feeling I heard a fragment at one point. More extensive listening would reveal, something I am sure.

This was a very pleasing test and one of the benefits of having the compact NR4SC was that it was easy to bring down to the lounge, with a PSU and connect up to the coax coming in through the patio doors! The NR4SC is very compact and would make the basis of a nice portable station. Just need a matching 150W PA now! 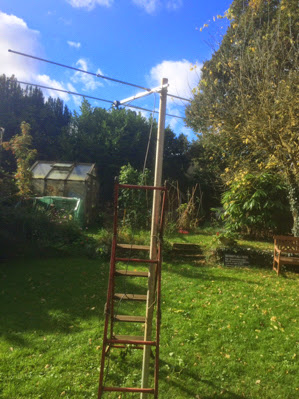