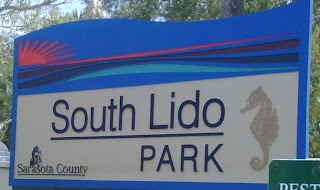 It turns out that there was indeed a park at the southern end of the island named South Lido Park that was the perfect location to try again. There was a parking lot that bordered the park, and there were a few parking spots that were close enough to picnic tables that I could easily set up the radio and antenna on a table (or even on different tables) with the power cables connected to the car battery. This seemed like a good opportunity to get the antenna even farther away from the car and the radio, and hopefully away from the source of the RF interference. I set up the antenna, and was able to throw the counterpoise over a nearby low tree branch. (One of the recommendations for this particular antenna is to keep the counterpoise at least 2 feet off the ground.) I carefully checked the SWR with the antenna analyzer and found a good match. 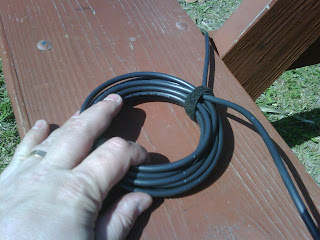 I decided to try to eliminate the feedline that I’d brought with me as a possible issue, so I connected the antenna to the radio with a very short (about .5 meter) patch cable that I’d brought with me. Normally it’s not a very good idea to set up that close to the antenna, but I figured that for diagnostic purposes I could do it. It turns out that I wasn’t going to transmit very long that way anyway since I had the same problem. At this point, I decided to go back to the regular feedline, which is a 15m length of RG-8x that I’ve used for the past several years without issue. What I did was to create an RF choke by coiling some of the excess feedline at the feedpoint. The idea behind doing this is to help keep RF off the outside of the feedline, where it can radiate and cause issues. Unfortunately, that didn’t seem to help either.

During these tests, in addition to just hearing the odd noise in my headset, and on the radio speaker when I disconnected the headset, I was attempting to call some stations that I had been hearing all afternoon. The location that I had now moved
to was even better than my previous location, as there was water on 3 sides, which means I had an especially good path to Europe, South America, and the southwest US. Some of the stations that I’d tried to contact were extremely strong and should not have been difficult at all to contact. I was finally able to make a contact with S55OO so I knew that the radio was actually transmitting, though he was in the middle of working many other stations so I didn’t have a chance to ask him for a signal report. At that point, I was confused and frustrated at not being able to locate the source of the problem, and given that it was getting late in the afternoon, I decided to break down and shut down for the evening.

After heading back home (well, not to NJ, to where we were saying), I sent an email the Buddipole Users Group to see if anyone there had any ideas what the problem might be. I got back responses from a number of folks within a few hours, most of them suggesting that I try most of the things I’d already tried (which of course they didn’t know I’d done). A couple of folks suggested trying to use some ferrite beads in various places on power cable, microphone cable, and power cables. Unfortunately, I didn’t have any with me, and they aren’t the kind of thing that are stocked in a local hardware store or even Radio Shack. Budd, W3FF, and Scott, NE1RD pointed out that since I’d made one contact that the radio must be transmitting, but it did seem that there was still some problem. 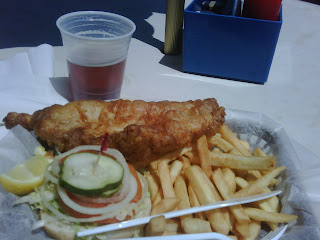 The next morning, I woke up, checked my email and found a few more things to try, packed up the car, and headed out for lunch at The Old Salty Dog on nearby Siesta Key. I was still frustrated that I hadn’t figured out what the problem was, but things always seem better after a beer and a fried Grouper sandwich. They probably would have seemed even better after two or three beers, but since I still had to drive back to the operating site I decided to stop after one.

When I arrived at South Lido Park, I found an even better location than on the previous day, where the operating position was under trees for shade and I was able to set up the antenna on a different table from the operating position, putting even more distance between the antenna, the radio, and the car. I made sure to have the RF choke in place as close as possible to the feedpoint, and wound up as much of the excess feedline into that choke to try to eliminate as much of the unwanted RF on the outside of the feedline as possible.

I was still hearing what I thought was RF in my headset (or from the radio speaker when I switched to the hand microphone), but I decided to call CQ anyway, hoping that perhaps someone would be able to hear me and perhaps let me know what my on-air signal sounded like. I finally got an answer back from Larry, KH6ITY who, as it turns out, was a technology teacher in Texas and was in the middle of demonstrating ham radio to his class. As it turned out, meeting Larry on the air was a wonderful stroke of luck.