The NA-034 operation that almost wasn’t, Part I

As I mentioned in my posting from last week, I spent a few days in Florida recently. I was down there visiting family, but had free time in the afternoons and had planned on operating for a few hours each day from Lido Key, which is IOTA designator NA-034. Briefly, IOTA (Islands On The Air) is a program where hams operate from various islands all over the world and make contacts with other hams. There’s an awards program for contacting various numbers of islands. The rules (link goes to a PDF file) for what qualifies as an island for IOTA purposes are a bit complex, but Lido Key, just west of Sarasota, Florida, qualifies. I’ve made a couple of trips down there in the past and had a lot of fun operating from that location.

My plan was to head out to the parking lot of Lido Beach and set up there, as I’ve done in the past.This location is very easy to get to, and the parking lot has never been full when I’ve been there, so I can take up as much space as I need. For this portable operation, instead of using hamsticks (which are very straightforward to use but since they are nearly 2 meters long, are hard to ship), I decided to use my Buddistick vertical antenna. I’ve written about the Buddistick quite a bit here before, you can do a search from the search box on the right of the blog home page for “buddistick” to see all the references. Because Sharon and I didn’t want to have to check baggage, I shipped the radio (my trusty Icom 706MkIIG), feedline, power cables, and Buddistick down to a relative a couple of days before we left NJ.

I set up the radio and initially mounted the antenna on the rear of the rental car, a Mazda 5, which seemed to be a good way to get it up fairly high and also allowed me to toss the counterpoise wire over a low tree branch. 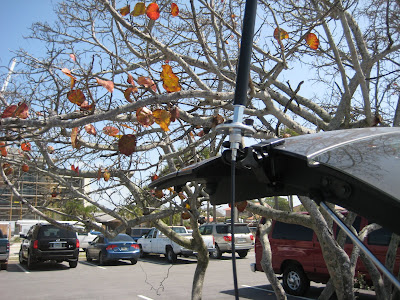 (It’s a bit difficult to see, but you can view the counterpose wire just above the bottom of the picture, it’s the very thin wire.) I set up the antenna, configured it for 20m, and checked it with the antenna analyzer, where I found that I had excellent SWR at my intended operating frequency of 14.260Mhz (one of the standard IOTA frequencies). I connected the antenna to the feedline, and used the built-in SWR testing in the radio to ensure that the SWR was still good (it was), found that my intended frequency was unoccupied, and started to call CQ. That’s when I discovered that I had a pretty serious problem.

The problem was that when I keyed the radio and called CQ, I could hear a lot of what sounded like RF feedback in the headset. My assumption was that for some reason, the transmitted signal from the transmitted signal from the radio was being fed back into the radio, and causing the noise that I was hearing in my headset. As it turned out, I was wrong about the source of the problem, but I didn’t find that out for another 24 hours. Working on that initial assumption, I tried to move the antenna to a slightly different location on the car, and even tried to use the very small Buddistick tripod to place the antenna on the ground much farther away from the car, but had no success. (By the way, that’s a wonderful little tripod, but it’s really not designed to work on a concrete parking lot surface where you can neither dig the legs in nor secure it to anything. All it took was a tiny breeze to knock over the antenna. Fortunately, no damage was done to the whip antenna, but I’ll be a bit more careful about trying that again.)

At that point, I had to take a break from troubleshooting to join a conference call at work. (Yes, even though I was on vacation.) After the call and a follow-up call, about 90 minutes had passed. I tried a few more attempts to play with the radial height, move the location of the radio, and to create an RF choke by coiling some feedline at the feedpoint of the antenna, but was still having no success. I decided to try to find another operating location, hoping to find a park where I could mount the antenna on a picnic table much farther away from the radio, hoping that any RF problems coming from the antenna would be significantly reduced by the distance. I looked at the GPS I’d brought with me and it appear to show a park farther south on the island, so I put all the gear in the car, and headed south.

The saga continues in Part II.