I’ve had several opportunities to take amateur radio along on vacation and do a little radio operating from other countries. I try not to focus too much on ham radio during such a trip, as it has a tendency to create marital discord and can suck the fun out of the vacation. Some people call this a “holiday style” DXpedition, or maybe it’s just the slacker approach. 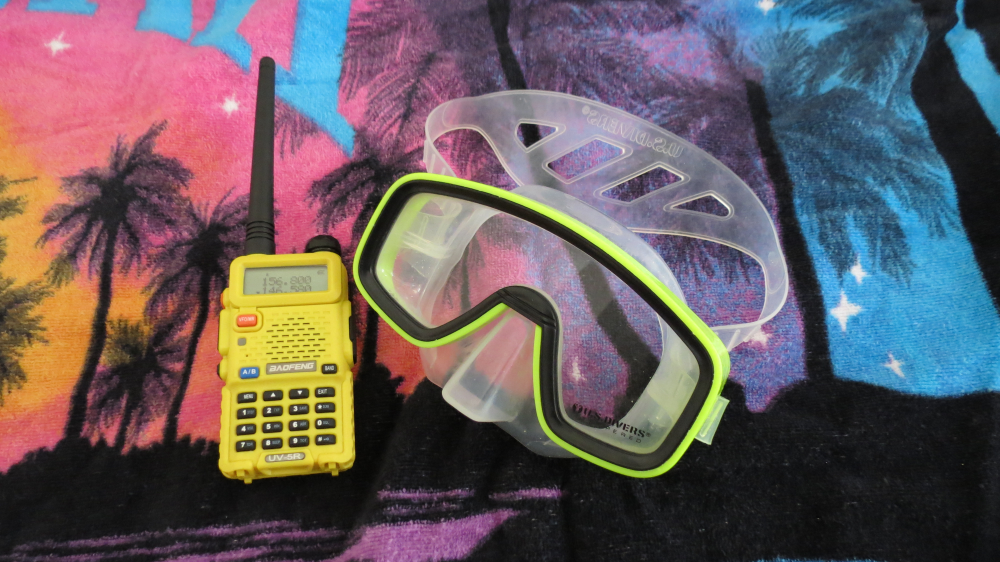 The marine yellow Baofeng UV-5R handheld transceiver got a lot of use.

Joyce (K0JJW) and I were planning a vacation with three other couples that we’ve known for years. It turns out that six of the eight have their ham licenses. (We’re still working on the last two.) Our primary goal was to find an island location with great beaches and snorkeling. Someone proposed the island of St John in the US Virgin Islands  and the idea took hold. 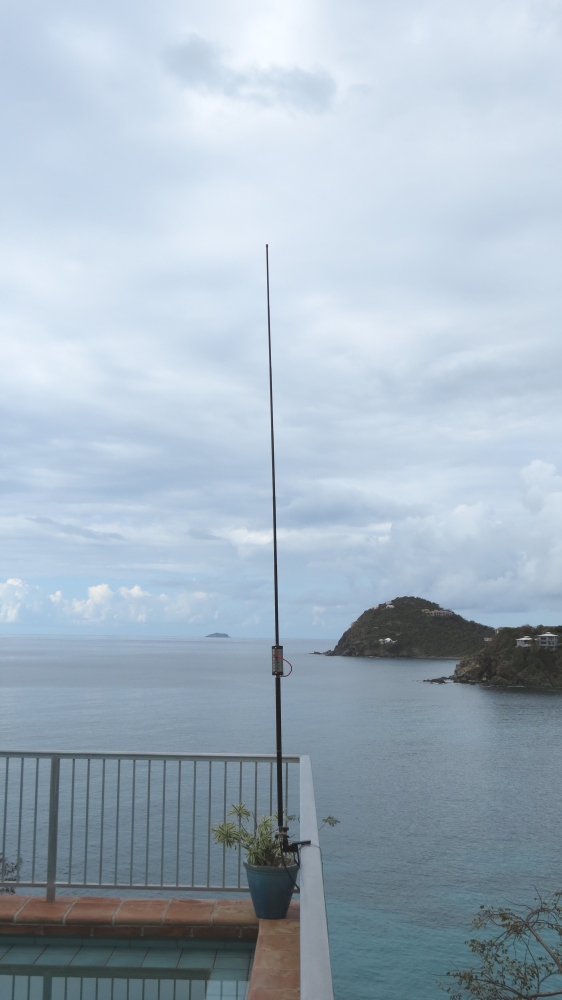 The Buddistick antenna is mounted on the railing of the patio, overlooking the sea.

From a ham radio perspective, USVI is an interesting choice since it does count as a DXCC entity (“country”), even though it is a US possession. See my article on HamRadioSchool.com for more information on how that works. Anyone with an FCC license can operate from there without any special licensing or approval. KP2 is the prefix for USVI, so identify as KP2/<callsign> to indicate that you are operating from USVI.

We were trying to pack light, so the radio equipment had to fit into our normal luggage. I took my Yaesu FT-817 and a Buddistick™ antenna. Paul (KF9EY) took along a Yaesu FT-100D, while Denny (KB9DPF) transported his FT-817 and a G5RV Junior antenna. Our primary operating mode was using the FT-100D (more power, baby) to drive the Buddistick, which was attached to the railing on the patio. 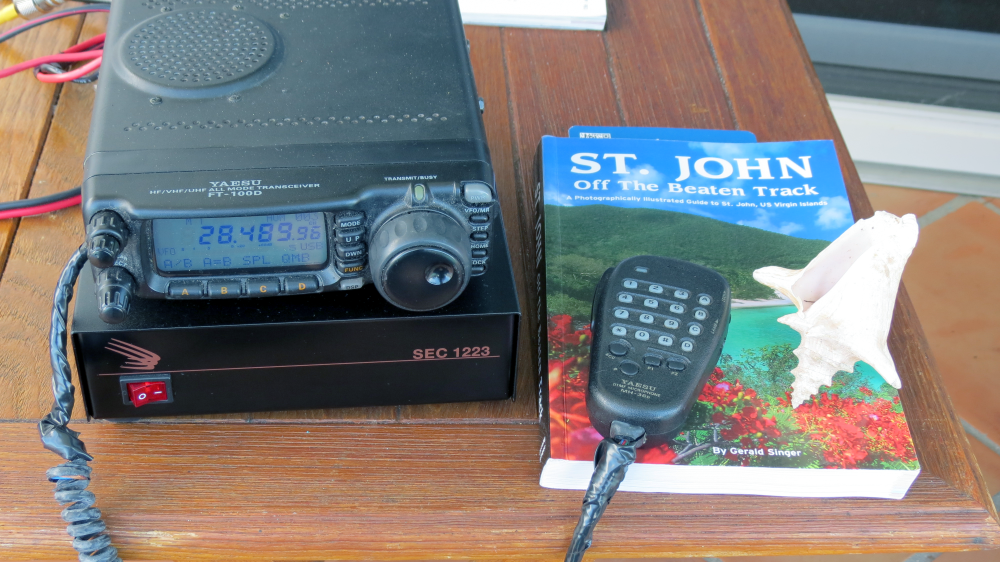 The FT-100D was the primary operating rig, carefully placed on a random table out by the pool, with the St John Guidebook nearby.

I decided that the true slacker approach required some Official Beach QRP contacts in the style of Buddies in the Caribbean (see the video). One day on the beach, I took along my FT-817 and the Buddistick and set up for some QRP action. 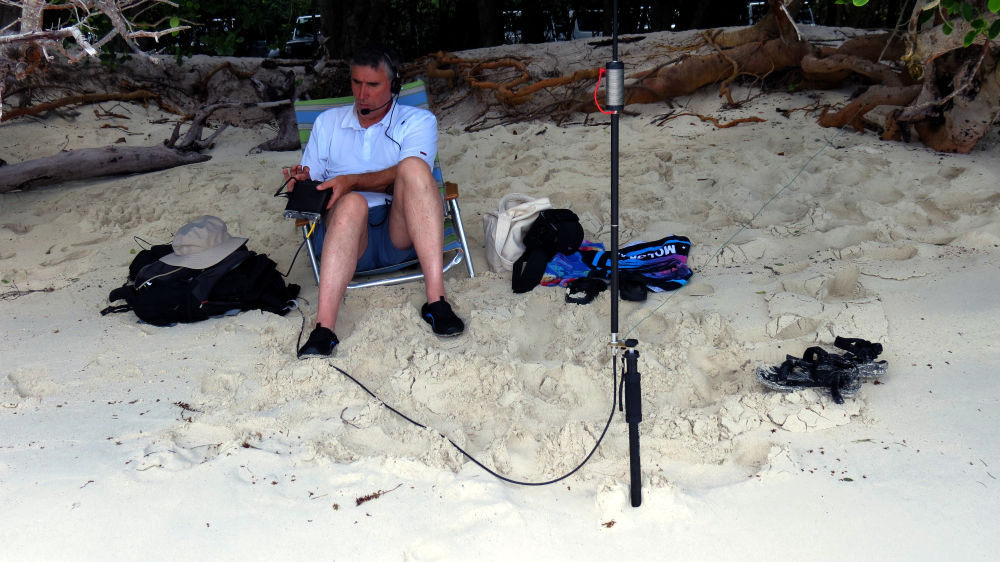 The Buddistick was mounted on a Dolica WT-1003 camera monopod stuck into the sand, with the radial trailing off into the vegetation. My compact Heil headset was a convenient way to make some phone contacts without blasting my fellow beach bums with noisy audio. 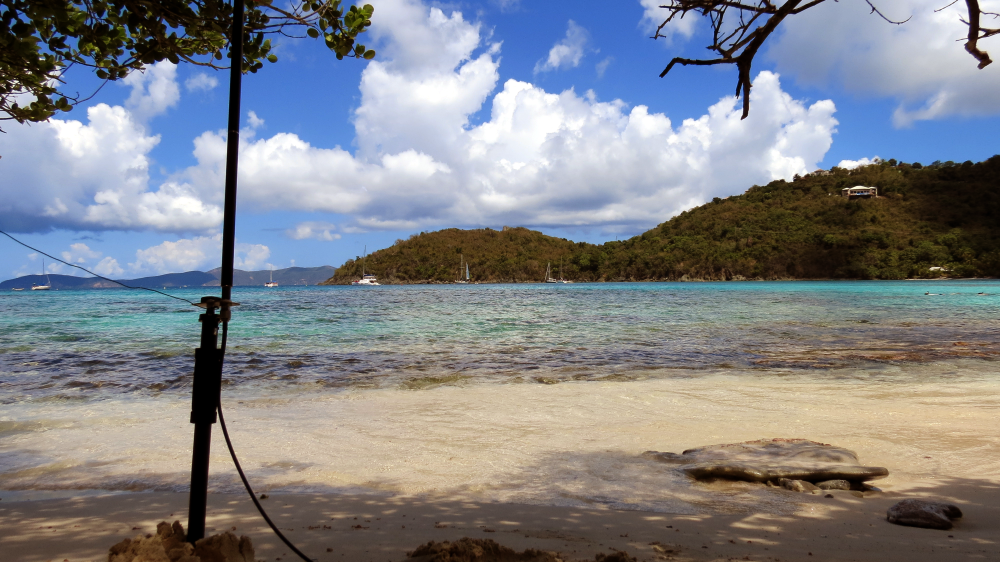 The view looking out from the beach operating location.

How did we do on the HF bands? We managed to make a number of contacts on 20m, 15m and 10m into the Americas and Europe. I was a bit disappointed that we never really got a pileup going. I think our signal was plenty strong but KP2 is maybe just not that rare. 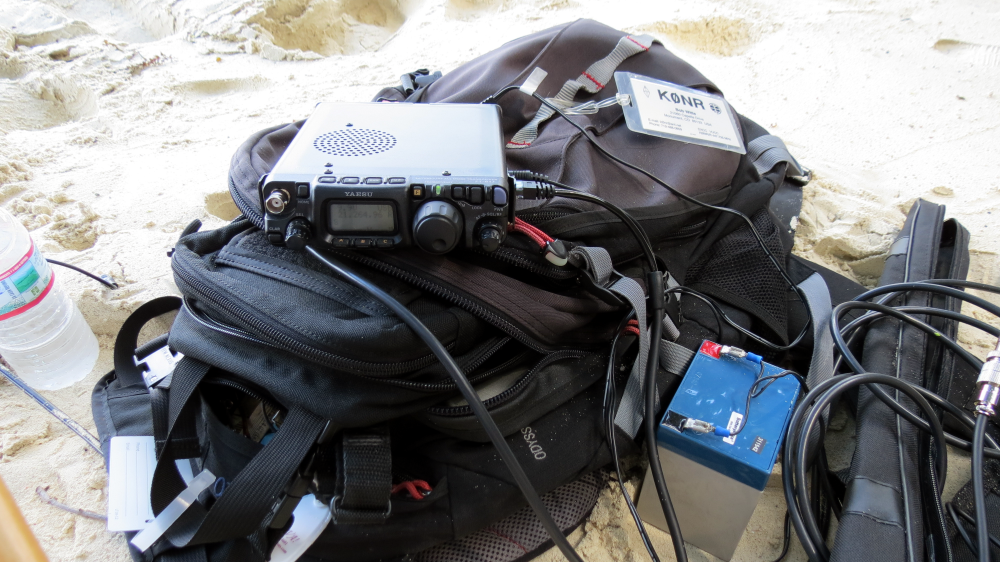 The innovative “plop the rig on top of a backpack” operating configuration.

We spent quite a bit of time exploring the island, driving around in two rental Jeeps. For mobile communications, we chatted back and forth on 146.58 MHz, the Golf-November-Tango frequency, using handheld transceivers. In the end, these radios probably got the most use during the trip. (Did I mention this was a slacker DXpedition?) There are a few 2m repeaters in the islands but we did not make use of them.

I brought a Yaesu FT-60 and a Baofeng UV-5R along on the trip, but mostly ended up using the Baofeng radio. If was the perfect radio to take to the beach — does the job and not that big of a loss if it landed in the ocean. Using the dual receive feature of the HT, I monitored the marine calling frequency, 156.80 MHz, listening to the boat traffic.

So if you are looking for a great place to go to enjoy the sand and water, I highly recommend St. John. Go ahead and take along some ham gear and do some slacker DXing. For more information on KP2 ham radio, see the ARRL Virgin Islands Section web site.