The G3LEK key that turned up in Chile?

15 February 2020 | by Steve G1KQH  |  Share |  Tweet |  Leave a Comment (2)
There was always a key player who I have always credited for getting me interested in this radio hobby and electronics. Len (G3LEK), who lived at the time in the 1970's five doors away from me in Fortescue Lane, Rugeley, during my youth. The first time I came across his radio gear is when his son Martin who I used to play with in the road, invited me in the old concrete garage one cold Winters morning. The back of the damp musty garage always had these strange bits of equipment with wires springing out and meters and stuff just hanging there in thin air, I never really took much notice about the stuff at the time. Until this one morning, there was Len, his Dad, pumping away at an old primer stove with a brick on top trying to keep warm "Brrrr it's cold Stevie" he said. While he was busy working away he had setup this ex miltary piece of radio equipment jacked up at an angle on a couple of blocks of wood in the centre of the garage. It must of been a very interesting experience, because I was only around 7 or 8 at the time and he alllowed me to twiddle the VFO and tune in these wonderful Short Wave stations from round the world, it was quite amazing! Especially when I could see these glass things giving off a strange orange glow at the rear of the front panel, the Radio stations I tuned you would never hear of today, the transmissions and their stations silenced and long gone! It would of been about 4 years later, I started building crystal sets, and on in my late teens went to work in the Test department for Thorn Automation, where Len also worked as a system designer after he had cut his craft being a radio operator in the Merchant Navy in the 1940's.

Of course being a ships ex Radio Operator, Len was also a very proficient CW operator, and this never left him throughout his Amateur radio years.

A few days ago Martin contacted me. who now is now 2E0LEK and following in his late Dad's footsteps with the hobby.

WOW !! I am amazed .... A British engineer has contacted me through the RSGB regarding my late Fathers CW Morse Key, and it is in Santiago Chile. I have been wondering where it had gone, and now I know. 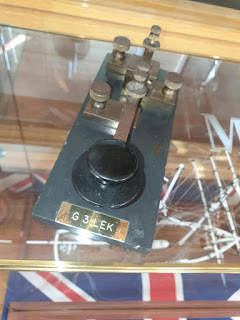 Martin said the chap who has got the old key is Simon, and he said it can be a bit iffy ....  His XYL is Angie who bought it from an antiques dealer in Santiago. The dealer found it in a secondhand market in the city, called Persa Bio-Bio……Apparantly a fascinating place to visit if you ever get the chance (but don’t carry any valuables and be very careful).


So Martin is now on the chase to find out how the key arrived in Chile? I know when Len left the old bungalow where he once lived, he cleared the garage out and filled up his VW camper van and took most of the ex MOD equipment to a place called Thackers at Cheslyn Hay (long time gone), Thackers were scrap dealers and breakers in ex ministry gear.

Leave comment below if you have come across the G3LEK CW key on it's travels. Martin would like to hear from anyone, who might know something.
.
Steve, G1KQH, is a regular contributor to AmateurRadio.com and writes from England. Contact him at [email protected].

2 Responses to “The G3LEK key that turned up in Chile?”