3 June 2019 | by Steve VE7SL  |  Share |  Tweet |  Leave a Comment (8)
For the past several months my interest in ‘DX-crystal radio’ construction has been percolating once again. It began when I ran across an interesting description of Heathkit’s legendary CR-1, a double-tuned good performer and very much sought-after by collectors as well as by users. The article described one homebrewer’s attempt to duplicate the receiver and to learn more about the detector and antenna tuning ferrite-loaded coil's secrets. 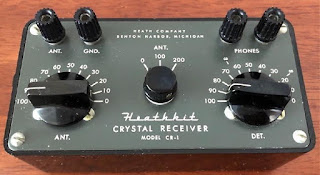 When it comes to crystal radios, there is nothing revolutionary regarding the CR-1’s basic circuitry but for some odd reason, it has achieved cult-like status as well as high dollar value.


I've been eager to get my mitts on one to see how it performs after reading of one DXer's fifty-eighth catch with his own CR-1!

The article that piqued my interest appears on 'Scott's Crystal Radios' website and makes for an inspirational read, eventually revealing the inside core arrangement of the ferrite-loaded tuned circuits via an actual X-ray of the device! By the way, if you are looking for a nice set of older headphones, Scott's website is the place to visit! 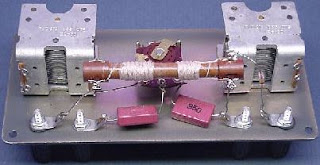 Scott was eventually able to achieve performance equal to that of his borrowed CR-1, with his own slightly modified versions, all in a similar-sized footprint. Perhaps this is one reason why the CR-1 is so much sought-after, as good performance in a very small package is not the norm when it comes to crystal radios. It's usually a case of ‘the bigger, the better’ when it comes to performance.


A recent search of my junque box revealed several NIB ferrite loopsticks that would allow a potntial reproduction of this interesting circuit. 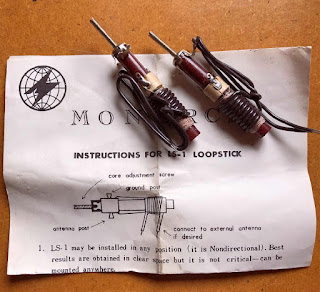 Several years ago I spent an eye-opening winter learning about DX crystal radios as up to that time I had always believed it would be impossible to hear anything other than strong local signals on a crystal radio. I quickly discovered that there was a very large Crystal Radio Yahoo Group where menbers were working at the leading edge of crystal radio design. I also found that the group sponsored an annual Crystal Radio DX Contest which inspired me to dig deeper.

It wasn’t too long before I decided to join the fun and attempt to build a crystal radio DX-machine but I was in for a few surprises and a long learning curve ... it seemed that hearing broadcast band ‘DX’ on a crystal radio (anything other than loud locals) was not going to be an easy task!

Over the course of several months I tried many types of variable capacitors, tank coil configurations and antenna tuning circuits. I even erected a dedicated antenna system for the various experimental circuits I was putting together ... an 'Inverted-L', 50’ straight up and 70’ horizontal, along with a ground rod connected to several buried radials.

I quickly learned about something I normally didn’t have to worry about when working with ‘active’ devices and that was overcoming system and component losses. In critical crystal radio design, it’s all about minimizing the losses in every stage and every component in the system since there are no amplifiers to help overcome these losses. Your system is only as good as the weakest link. In true crystal radio DXing, no active devices are permitted ... it’s just your crystal radio and the energy generated at some, hopefully far away, transmitter site!

After several months, I eventually ended up with a well-performing triple-tuned set that used lots of 'trapping' because of all of the very strong nearby signals here ... eight 50kW locals!

A description of the learning curve, with several do's and dont's to help new builders, can be found on my website here.

Back then, 80 stations were logged (from my location on Mayne Island in SW British Columbia) over the one-week Crystal Radio DX Contest.

Old notes indicate that there were 14 stations at S9 or higher, requiring heavy trapping to hear anything close to their frequencies.