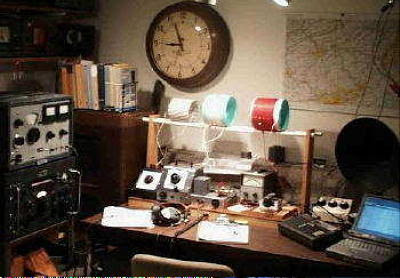 Back then, the contest was organized by the Yahoo Crystal Radio Group and then later, by the Alabama Crystal Radio Group. These contests were exceptionally popular and always sparked a huge amount of discussion, spurred new construction and seemed to create a lot of ‘crystal radio’ excitement in the months leading up to the contest.

Crystal radios can be as simple as a 'single-tuned' set like this, built by Mike Simpson from plans shown in Alfred P. Morgan's "The Boys' Third Book of Radio and Electronics". Read the nice back-story from Mike about this project! In the right location and with a good antenna, even simple sets like this are capable of hearing skywave signals.

At the other end of the spectrum are elaborate DX sets like this one, built by Mike Tuggle in Hawaii.

Mike regularly hears AM broadcast band stations in Canada and the USA on his crystal radio from his location in Hawaii ... he explains the details here.

Recently, along with Doug (K4LY) and Dave (N1DAY), I discussed how we might be able to again  resurrect this popular contest activity and after countless e-mail exchanges, we’ve now put together just such an event!

Accordingly, we invite any and all crystal radio builders and users to participate in the upcoming Crystal Radio DX Contest to be held from January 1 through January 8th, 2022!

This date period should provide ample time for new construction to take place or to make improvements to present radios, while hopefully finding some nice mid-winter propagation on the broadcast band … half the battle when it comes to DXing with crystal radios.

Some ideas have been gleaned from previous contests to provide a minimum set of simple rules that will hopefully accommodate crystal radios of all types.

There are two entry classes, ‘OPEN’ and ‘HOBBY’ with guidelines for each. You will only be competing against others in the same category or maybe only against yourself if trying to reach a set goal.

In the true spirit of previous contests, it’s more about having fun, optimizing your passive receiving system and creating some great discussions, both before and after the contest … this really makes every participant a winner in the end.

As an anchor point for discussions regarding this and future such events, the Facebook ‘Crystal Radio DX Contest Group’ has been created and anyone that might be curious or interested in possible contest participation is encouraged to join.

In no way is this group intended to usurp activity from any present groups and it should not. It will be a focal point where members can find and discuss activities generated by the upcoming event. What are you building or improving for the contest? What are your plans? Share your crystal radio DXing strategies. Any thoughts or comments related to the upcoming event are fair game!

The Crystal Radio DX Contest Group can be found here where you can find discussion as well as the rules.

As well, the rules in pdf form, may be found here if you are not on Facebook.

Hopefully you will consider entering the contest ... it was always an enjoyable event.