The best laid schemes o' Mice an' Men, Gang aft agley,
An' lea'e us nought but grief an' pain, For promis'd joy!

That sums up my weekend perfectly.

After becoming licensed my eagerness got the better of me and in a moment of weakness I'd purchased a couple of 10m ready made cables from a major supplier only to discover quite quickly they were made from low grade RG58 coax (you can literally count the number of strands in the braid) and the connectors while serviceable were so poorly fitted they fell off!


I had refitted the connectors using some solder this time and had managed to blag a 20m length of good quality RG58 (this actually has some braid) and I am ashamed to say these cables have been the weak link in my set up for far too long and needed to be upgraded.

I also needed to sort out the mounting for my aerials. Up till now I have been using a 5 meter telescopic painting pole that had cost around £16 from B&Q, it was okay when I was just clamping one aerial at a time to it but with the purchase of the rotator I has been chancing my luck with the loading, narrowly avoiding catastrophe when pushing the pole. I also couldn't fully extend the top section as the tube and joint were potentially weak. It was guyed quite well but was far from aesthetically pleasing, even in the summer sunshine!

I couldn't fit anything to outside of the house, not only for logistical reasons but also it wasn't sanctioned by the station manager. Anything on the side of the house would be highly visible from the road and the back wall of the house has too many large windows and an extension making it inconvenient to fit and access anything.

Never fear I had a plan, a 20ft (6m) scaffold pole bolted using swivel joints on to to an another pole concreted in the ground in the back garden. The garden was extensively landscaped a few years back but it was before I became licensed, so I hadn't planned ahead. With careful negotiations with the station manager I secured a location where I could put it.

Thanks to my local handy man I now have two 10ft scaffold poles, sunk to a depth of nearly 5ft and encased in concrete in the corner of the lawn. A few inches of soil was left on the top to allow the grass to grow. They have been left for over a fortnight to completely set.


I ordered a 100M reel of RG213 coax from Nevada Radio along with plenty of high quality N-Type connectors and various clamps and intended to sort out my antenna set up this weekend and banish the abysmal RG58 coax and PL259 connectors to some dark corner of the shack.

Before I took everything down on Saturday I managed to make contact with GB0TDF the special event station being run by the Denby Dale Radio Society from Cartworth Moor, Holmfirth for the Tour de France Grand Départ

A few months back I picked up a cheap rotator at the Dambusters Hamfest. It is designed for television aerials and isn't heavy duty but I was sure it would cope turning with the small 2M, 70cm Yagi and a 6M antenna on the same pole, with the X-50 collinear on the very top. However I was concerned by the potential lateral loading.

The rotator is a generic design and I spotted that an optional support bearing is available as an accessory. I chanced on one via Ham Radio Deals and had salvaged several good lengths of galvanised pole from a skip where I work. So the plan arrangement was as shown.. simple right?


It turned it a frustrating morning after cutting the metal pole to length, bolting and clamping everything together I tested it at ground level with no antennas and the rotator refused to turn correctly and I narrowly avoided burning it out.

I checked poles and they were true, the rotator was free running as was the bearing. I unbolted, fettled and just couldn't make it work. I went away and had a beer while watching some of the Tour de France on the TV and in a moment of clarity realised what the issue was.

The problem was the diameter of the salvaged pole I was using. It was was slightly narrower (a couple of millimetres) than the hole in the bearing. I'd assumed it would line up with the rotator as it was similarly clamped, however when all clamped up top and bottom the pole wasn't perfectly perpendicular and wouldn't turn due to the eccentricity, Hopefully the drawing illustrates the problem. 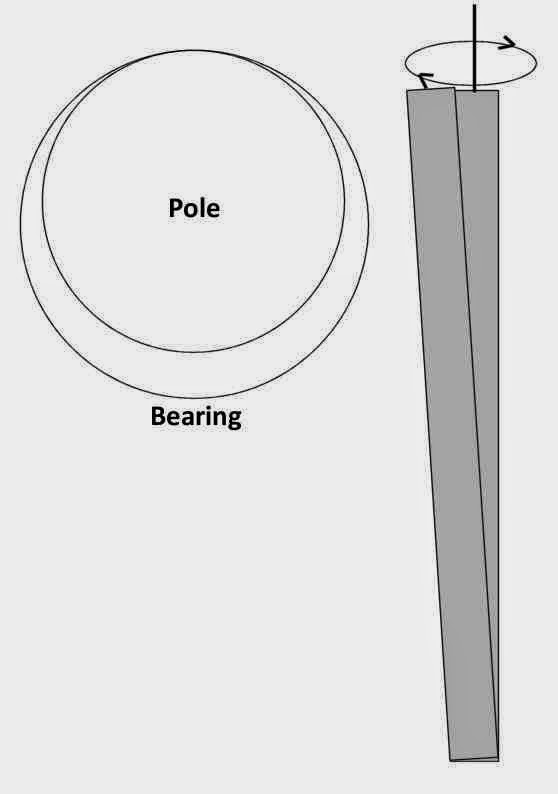 Annoyed by this basic school-boy error I reverted to Plan-B for the short term, no support bearing! I was in bad mood now and so decided to leave the rewiring to another day. So I quickly put the 2M yagi on the existing coax as a test on the new scaffold pole to make a few contacts for the VHF NFD.


Walking up the scaffold pole is straight forward, I have bolted a small cut off of scaffold across the top of support poles to act as a safety stop, lowering it likewise easy and I will certainly build up the muscles!

I managed to grab just 8 QSOs but was otherwise engaged for the rest of the weekend, however I was encouraged by the distances.

I hope to get the 70cm antenna up tonight on the RG513 ready for the 432MHz UKAC on Tuesday evening.