Despite my interest in boat-anchors I do find myself peeking ‘over the wall’ from time to time and taking a look at new and emerging technologies. After several demonstrations from friends I had become convinced of the incredible potential of software defined radios and even found thinking about owning one … one day.

Perhaps the best known SDR in amateur radio circles are the FLEX rigs from FlexRadio. I had the chance to see a FLEX-3000 in use during Winter Field Day 2011 and had to admit that, barring the lack of knobs & dials, it was a very impressive rig!
One thing stopped me from running out and buying one straight away was the cost and perhaps the notion that once the new had worn off I would regret the significant outlay required to own the blue box. So, I shelved the idea of owning an SDR and found other things to occupy my time.
This changed when a post on www.reddit.com/r/amateurradio/ mentioned an unmodified digital TV receiving USB device that had been used as a software defined receiver in the 60MHz – 1.7GHz range. The best part was the cost, around $20 for most examples of this kind of device. Finally software & commodity hardware had come together to deliver useful receiver that everyone can afford.
The nuts and bolts:
There are specific parts required to put together your own $20 SDR but I will document what I used to get mine running and hopefully you can follow along. 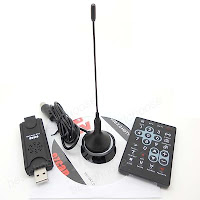 Hardware: The device that I used was a Ezcap EZTV668 DVB-T Digital TV USB 2.0 Dongle purchased from DealExtreme. The part was shipped from Asia and I gather from reading else ware that DealExtreme is a middleman and not the actual supplier. Be prepared to wait a while if ordering from this supplier, my Ezcap took about 3 weeks to arrive but I have heard that a month or more is not uncommon.
The upside is that shipping is free and your purchase involves 0% tax, this really IS a $20 SDR.
This particular DVB-T dongle uses the RTL2832U chip which is required for use as an SDR, other dongles with this chip may work but if it does not have the RTL chip it will NOT work currently. 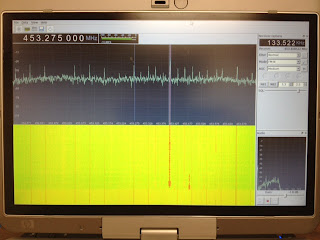 Software (Linux) : After poor results with the software running on MS Windows I moved across to Linux and got it working well there. I can’t point you to a single howto for this because I used several different guides and tried a few things before it started working. The most helpful, and probably all you really need, are the build-gnuradio script which gets hardware support and gnu-radio running and the “Getting Started With RTL-SDR” page by Tom Nardi which covers installing Gqrx. All the software used is in development and requires familiarity with the command line to install and use at the moment.

Software (Windows) : I had another shot at getting the MS Windows software running and stumbled across the excellent website http://rtlsdr.org. Rtlsdr.org mentions using a new version of SDR# software which worked very well!
I would recommend following the instructions under the Windows Software section, this had me up and running in a matter of minutes. Follow the instructions EXACTLY, I made life hard on myself by not paying attention to details and I think was responsible for my earlier issues.
Going further – Antenna : The stock antenna that is supplied with the Ezcap EZTV668 is sufficient for testing but you’ll want to add something a bit more substantial for regular use. You may even want to remove the existing (hard to find) antenna connector from the board and install a standard connector and a less flimsy metal casing. This will help with RF shielding and temperature stability.
If you are going to use a larger antenna, especially an outside antenna, you’ll want to check to make sure a protection diode has been fitted to the input. The Ezcap EZTV668 is a very inexpensive device and others have found units in which the protection diode was not fitted to save costs. 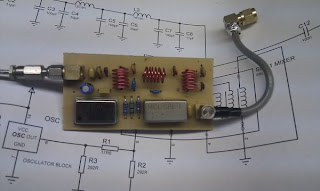 Going further – 160M – 6M ? : I’ve just seen an interesting blog post titled FunCube Upconverter where the author, George Smart, has built a converter allowing the reception of 160M – 6M using the FunCube dongle. The FunCube is functionally the same as the RTL dongles available for $20. For any home brewers out there this could be a great project as George has included all the details including schematics and board artwork required to build the converter.


Update : Thanks to a link from Neil W2NDG to an EBay sale I’ve been able to track down a pre-assembled HF up-converter on this page : New HF Converter Kit for the SDR Fun Cube Dongle The price seems to be 45 euros, or about $55 US.
I’ve had a lot of fun using the $20 SDR to listen to AM aircraft traffic, local repeaters, emergency services and amazingly good quality broadcast FM stereo programming. Its easy to see, with an SDR, just how wide a radio broadcaster is transmitting and move your filter bandwidth to match.
Hopefully this is just the beginning of inexpensive SDR hardware that the radio community can re-purpose and re-engineer.
Owen Morgan, KF5CZO, is a regular contributor to AmateurRadio.com and writes from Texas, USA. Contact him at [email protected].

2 Responses to “The $20 Software Defined Radio”