Last weekend I enjoyed running my 1W WSPR system up on 7MHz and was surprised by just how far it went. I wondered how a 1W CW signal would fare this weekend on the same band, given the activity in the CQWW CW contest. The activity of course is both a good thing; plenty of people to call and a bad thing; lots of interference.

After I’d finished writing my Practical Wireless column today I tuned up 7MHz and checked the output was set at 1W. I did what the low power guys recommend and called the loud ones. After all, if they’re way over S9, I shouldn’t be *that* many dB down!

First in the log was EA2EA, quickly followed by DF0HQ. RX4W, 9A1A, YL9W and OG2A all get the ‘Golden Ears’ award! By that stage I’d lost interest, having proven that it worked, but made a note to try 7MHz later when it opened to the USA. 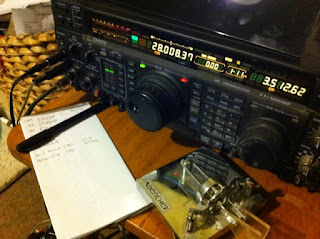 I was curious whether 28MHz would be open. Certainly not in a major way, but I could hear some African activity and some meteor bursts from European activity. I kept tuning up and down waiting to see what would appear. What appeared was PJ4A. They took a little working, but after a minute or two I had them in the log. Also coming in from the Caribbean were ZF1A (great to hear, as I’ve operated from there!) and KP3Z though I only heard those two briefly. Some US stations were heard, though not worked; KC1XX, W4SUL, AD4ES and K1TO amongst others. An hour or so later, I checked the band again and was interested to hear C5A coming through. To my surprise, and how often does this happen when you run 100W to a vertical, they came back first call.

After supper, I thought it was time to see if I could work the US on 7MHz with 1W. KC1XX was the poor unfortunate I picked. But we did it! It took a few repeats but the team there pulled all the information out and I was glad to hear that they took a lot of care to make sure they’d got the information ok. Next time guys, I promise I’ll call with higher power and make an easier QSO for you.

I enjoyed the 1W challenge. No doubt Justin will be pleased I played ‘real radio’, but I suspect that my next 1W operation will probably be on WSPR again!