I tend to joke, although it’s not really so much of a joke that my basic operating pattern is to operate VHF/UHF over the summer months and then HF datamodes, specifically JT65A and JT9 over the winter months. There is more flexibility in this really, but when VHF isn’t doing much, it’s HF JT65 and JT9 that I find interesting. 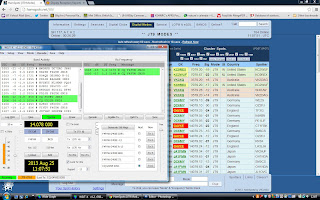 This morning dawned so autumnal and there was nothing to be heard on 50MHz that I decided some JT65 was probably in order. I fired up WSJTX v1.1 which I installed a few weeks ago and had a couple of nice 14MHz QSOs with CT3DL and EA7CHS to prove it all still worked.

After breakfast, I noticed that there was a beta release of WSJTX v1.2 so I downloaded it. I installed it and initially my heart sank – as there didn’t seem to be an option to select the Direct X sound drivers on transmit. You may remember if you have been reading the blog for a while that I found I needed to select these in order to transmit intelligible JT9.

I decided to go ahead anyway and if I needed to, I could rollback a version. Fortunately, this was not necessary. I had a quick listen on the monitor receiver as I transmitted both JT65A and JT9 and the signal sounded good. So, whatever there was before that was causing this problem, Joe K1JT seems to have sorted it out! I was also pleased to see that both my JT65A and JT9 transmissions were picked up by other people – so it must be decoding ok. I was particularly pleased to have my JT9 transmission picked up by TF3G in Iceland.

Initial impressions of v1.2 are good. I can see some JT65A decodes which look a bit suspect to me, but we’ll see how those go! On the positive side, I like the new power slider on the right hand side of the screen, which allows you to tweak the power down. I think this will be particularly valuable on JT9, which is exceptionally good for low power QSOs.