Yesterday I attempted to have a QSO using the XBM-10-2 two transistor “Chirpy” transceiver for 10m. I asked Jim, G3XPD, who is about 8km south of G4ILO to listen out for me. Jim could hear the distinctive sound of my 100mW transmission, but I could not hear Jim, not even when he called using 100W. 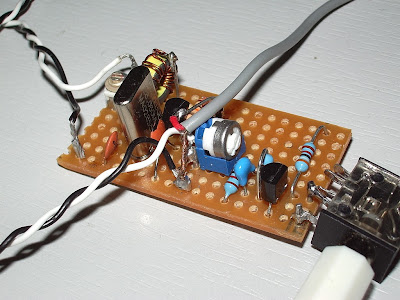 I know the Chirpy receiver works because I can receive a locally generated signal such as my antenna analyzer. But I guess even that is a big signal compared to one received off the air. I need to find a way to improve the receive sensitivity if it is to be possible to make a real two-way contact using this simple transceiver circuit.

I have tried adjusting C2 for maximum noise in the earpiece rather than maximum output when the key is down, to see if that gives some improvement. If nothing else it seems to have tamed the chirp a bit.

Not without some difficulty due to my shaking hands, I managed to modify my copy of Roger G3XBM’s XBM-10-2 two transistor transceiver for 10m to his latest version. It is now named the “Chirpy” for reasons that will become obvious when you hear one on the air.

My version is exactly the same as Roger’s except that R3 is a trimpot not a fixed resistor. This allows me to adjust the power output to what I want. I am getting 150mW output on a 13.8V supply, this drops to 50mW with a 9V power source.

So far I have yet to make a contact with the little rig. I have called CQ on 28.060 many times but my signal is yet to be spotted on the Reverse Beacon Network. I don’t know if that is because my signal is too weak or too chirpy for decoding by the skimmer stations. Or perhaps the skimmers don’t receive that far up the 10m band. I will probably have to arrange a sked with a local station who is near enough to hear me.

With ten metres opening up it seemed the right time to try building Roger G3XBM’s latest project: the XBM10-2. Roger describes it as probably just about the simplest CW transceiver possible for use on 10m, using just two transistors to produce about 60mW out. 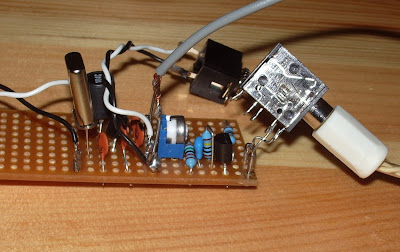 This was my first attempt at construction since my radiotherapy and chemotherapy and I found it to be quite a struggle. First of all I found it difficult to concentrate while trying to work out the perf board layout. After that I got a bit frustrated with constantly juggling three pairs of spectacles due to my eyes apparent inability to focus at different distances. I also found soldering difficult due to my hands shaking whenever I brought the iron bit close to a component. I created quite a few solder bridges which I then had to clean up.

Construction took much longer than I would have taken a few months ago. But in the end it did work. Though not on ten metres yet. I’m waiting for a 28.060MHz crystal from the G-QRP club shop before I can try it out on the air.

One issue I have found (which Roger also comments on) is that the rig has a major chirp. It is definitely not T9 and I don’t know whether it is possible to improve on that. But at least it has character. If you hear a weak, chirpy signal near to the 10m QRP activity frequency give it a call. It might be me!