I am pleased to announce that Steve Weber, KD1JV, has designed another new kit for Hendricks QRP Kits.  The kit will be on sale for the first time Friday and Saturday at the Yuma Hamfest.

Your first question might be why did they name it the “Survivor”.  Well that comes from several years ago when Jim Cates and I were running Norcal.   Many people have asked me what my favorite Norcal kit was, and they were usually surprised when I told them it was the Epiphyte.  The Epiphyte was a ssb transceiver that was designed by the late Derry Spittle, VE7QK.  It was a marvelous design, and worked fabulously.  Several people were able to work all 50 states with it, and Vern Wright probably worked well over 100 countries with his.  I kept a daily schedule with Derry and Vern for over 9 months, never missing a day of making contact.  So?  We were using dipoles up about 30 feet, and Derry, Vern and I were all running Epiphytes with 5 Watts of power!!  Derry was in Vancouver, BC, and Vern and I were in California.

The only problem with Derry’s design was that the parts were basically obsolete when he finished the design.  He use a Murata filter that is no longer available, and neither is the round 8 pin driver IC.  Norcal kitted 100 of them, and I was finally able to find the filters on my trip to England.  The 100 kits were sold out almost overnight, and there was a clamor for more.  But we just could not source the filter, and we were never able to do another run.  George Dobbs did do a smaller run for the G-QRP Club, which also sold out very quickly.  I have always wanted someone to design a radio similar to the Epiphyte, but using parts that are available.  I wanted it simple, easy to build, yet capable of making reliable contacts on 75 meters. Last year at Dayton, Steve Weber and I were talking, and I asked him to design a modern version with the Epiphyte as the model, but using parts that I could source.  Steve agreed and the Survivor  is the result.

Now how did we come up with that name?  Derry used to take his Epiphyte with him whenever he went on camping trips in the back woods of British Columbia.  In fact, one time he used it to get rescued.  Derry would take a 130 ft. dipole made out of magnet wire and RG 174.  He would string the dipole on bushes, about 3 or 4 feet above the ground.  He ran the short length of coax into his tent, and used that setup to check into a British Columbia SSB net at 8:00 every evening when he was out.  The setup was a perfect NVIS system and Derry had reliable contacts out to about 200 miles. He often said that the Epiphyte was what gave him the confidence that he could survive any situation in the woods, because it worked so well.  So to honor Derry, and to illustrate one of the great uses for the rig, we called it the Survivor.

Ham radio has been used many, many times for rescue.  But 2 meters doesn’t always reach a repeater in the woods.  Many hams want to talk with their wives back home while they are hunting or camping, but many of the wives don’t know CW.  The Survivor is the perfect rig for taking camping.  With a battery, simple dipole antenna or end fed half wave only 4 feet off the ground, reliable communications with SSB are available.

We also think that groups and clubs that like to build will find this a perfect club project.  Hams love to talk and hams love to build.  Think about how much fun a round table of locals will be with radios that you build yourself.  It is a great way to get club members involved and motivated to operate.  The kit is only $100 for the basic radio.  Accessories include digital readout for $35 and an electret microphone kit for $15.  But, if you buy the combo together, radio, digital readout and microphone, you save $10 as it is available for $140.  The kit will be available on Hendricks QRP Kits web page at www.qrpkits.com on Sunday, Feb. 17th.  The rig is easy to build and align.  In fact the only test equipment needed is a volt ohm meter and a dummy load.  Doesn’t get any easier than that.  The kit is complete with everything needed to build.  Case, commercial quality pc board, all through hole parts in the radio (the digital dial has surface mount parts but is easily built) and an online manual so you can see what you are getting into.

If you attend the Yuma Hamfest this weekend, you will get a sneak peak at this radio.  We will have them available for sale.  Hope to see you there at the Hendricks QRP Kits booth.  72, Doug 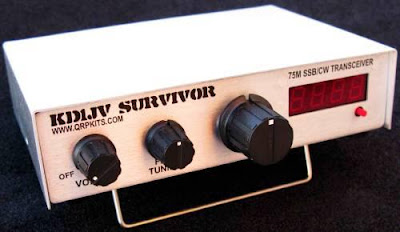 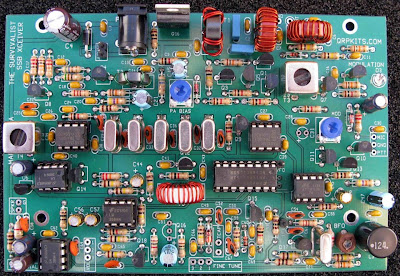 Looks like another fantastic offering from Doug Hendricks and Steve Weber.  We are so fortunate to have gentlemen like these continuing to supply us QRPers with fine fare.

This coming weekend is the ARRL DX Contest.  For you contesters, this one is the “Big GranDaddy” of them all.  I am willing to lay down some heard earned cash that ALL the “Non-WARC” bands will be active this weekend, abuzz with all kinds of signals from all over the world.

So, what’s a non-contester to do?  Well, you can go to the WARC bands (i.e 30, 17, 12 Meters) and rag chew to your heart’s content. You can go up to the phone portions of the band and give SSB QRP a whirl. You can stay off the radio altogether – take in a play, read a good book (I have several suggestions, if you’re so inclined), go to a movie, a museum, go visit your wife’s family, shovel snow, paint the bathroom, clean out the attic or garage, etc, etc, etc.

Or …… you can get creative.

If you’re brand new to DXCC but are not into contesting, you can still easily (and I mean easily) walk away with a quarter or more of your DXCC award achieved within a single weekend.  If you’re really dedicated and conditions are good, it’s NOT unheard of to actually accomplish DXCC (even QRP DXCC) in a single weekend.  Just listen around and cherry pick the stations that are in the countries that you need. This is also a good opportunity to hunt for Alaska and Hawaii if you need those two for WAS.

For QRPers, a contest like this can be like Manna from Heaven.  There are a ton of “Big Gun” stations on the air from all over the globe, with monstrous Yagis on top of stratospheric towers, just waiting to pick your QRP signal out of the aether.  This is truly one of the two or three great QRP DXCC opportunites that presents itself throughout the year.

Is DXCC a “been there, done that” thing for you?  Not interested in working towards DXCC Honor Roll? There’s still a bunch of exciting opportunities out there for you.

Turn down your power even lower – see how far you can work on 1 Watt or less.  This is a great way to earn a cool looking “Miles Per Watt” certificate for your shack.  I did something similar a couple years ago, I turned down my power from 5 Watts to 2 Watts and I was amazed that it didn’t seem to have made much of a  difference at all.  I was working foreign countries left and right, as easily with 2 Watts as I had been with 5 Watts.  I’ll bet you’ll be amazed at how much you’ll be able to snare by even going QRPp, in the milliWatt neighborhood.  Personally, I’m playing around with the idea of seeing how many countries I can work using 900 mW.

Or, you can use the contest as a vehicle towards earning other, neat looking certificates to wall paper your shack.  Here are some good Websites with links to all kinds of good information about earning DX operating awards.

If your CW speed isn’t the greatest, don’t get discouraged.  I am going to tell you right here and now, the CW sent for roughly the first 12 hours or so of the contest will probably make your head swim.  Speeds approaching 40 WPM are not rare at all.  Can you say, “buzz saw”? Towards Saturday evening and all day Sunday, CW speeds will approach what the rest of us mere mortals can handle.  The latter part of Sunday is THE best time for QRPers.  Point hungry super contest stations will be more likely to listen for weak signals that they might have otherwise ignored or glossed over.  This is a good time for QRPers.

Finally, if you get on the air and you’re totally blown away by the ARRL DX Contest; but still want to give QRP contesting a try, you’re still in luck.  After the big contest is over on Sunday, the Flying Pigs February Run for the Bacon is this Sunday night.  This is a small and friendly two hour QRP sprint that is a very fun event.  Comparing it to the ARRL DX Contest, it as far as the East is from the West.  But it is a blast and all are welcome – and most, if not all QRPers will be more than happy to QRS for you, if needed.

Above all – have fun!