I still haven’t made a contact with the little Nano-40 QRPP transceiver I made, but after listening on several occasions I finally heard its signal coming back from the Web SDR at the University of Twente in the Netherlands at 2100 this evening. 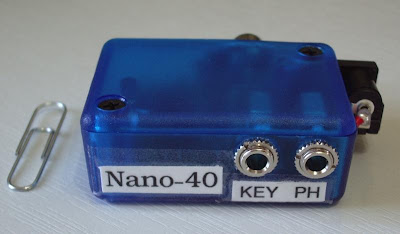 I sent a few V’s and clearly heard them come back with a second or so delay from the remote receiver. I then attempted to send CQ, but the distraction of the delayed signal made it difficult. The signal was lost in the noise some of the time, but at other times it was perfectly clear and readable. I calculated the distance between my QTH at locator IO84hp and the Web SDR at JO32kf to be about 750km or about 450 miles. Not bad for 150mW to an MFJ magnetic loop antenna in the attic! Isn’t QRP amazing?

I will treasure the first contact I make with this little radio, so for the time being I am not going to cheat and try to arrange a sked because it would be much more of an achievement to make a contact that happened naturally. But if you should hear me one evening calling CQ close to 7.030 please reply slowly because I can probably hear 4 or 5 different stations at the same time and my CW is not that hot so it will take a lot of concentration for me to read you. A bit more power might help too because the little guy’s receiver isn’t as sensitive as the one you’ll be using.

I didn’t plan to produce a schematic of the Nano-40, the tiny 40m CW transceiver I built based on Roger G3XBM’s 80m XBM80-2 design as modified by Alan VK2ZAY as I don’t claim any originality for the circuit. I provided the original sources and discussed the changes I made to the circuit and thought that other builders would follow the same path. 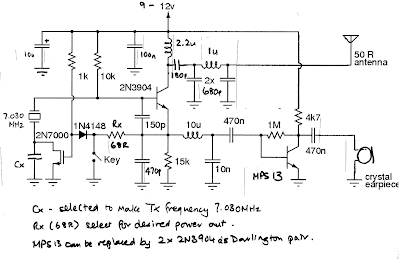 However I have been asked by a couple of people already if I could provide a schematic so I have patched a copy of the circuit diagram produced by Alan to show what I ended up with. I hope that will keep everyone happy, but please remember that without Roger G3XBM’s genius and Alan VK2ZAY’s improvements the Nano-40 would never have happened.

Today I finally completed the little 40m CW transceiver based on Roger G3XBM’s 80m XBM80-2 design as modified by Alan VK2ZAY and further modified by me to work on 40m. I tried to think of a name for it that would acknowledge both these sources of inspiration, but I couldn’t come up with anything snappy, so in the end I named it the Nano-40 because it is very small and works on 40 metres.

The circuit is essentially the same as the one given by Alan VK2ZAY with a few component changes determined empirically while the rig was on the breadboard to allow for the fact that it is working on 40m instead of 80m. There is only one stage of low pass filtering instead of two, as I described in an earlier post. This seems to be quite adequate. I checked the output waveform using my new oscilloscope and it looks nicely sinusoidal. I also used an MPSA13 Darlington transistor instead of a 2N3904 in the audio stage for a bit more sensitivity and gain.

With the component values I chose the little rig gives 150mW output on a 12V supply or about 75mW using a 9V PP3-style rechargeable battery. There is no sidetone, but it has full QSK. Using my Elecraft XG1 test oscillator I found that a 1uV signal is just about audible. However, bearing in mind that you can receive all activity around 7.030MHz plus and minus the limits of your hearing, a workable signal would need to be a bit stronger to stand out from the crowd! 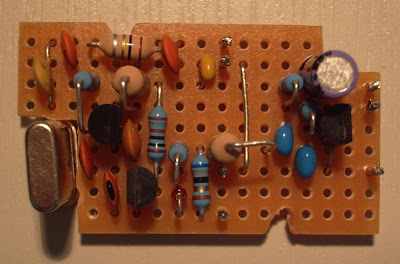 The circuit was built on to a small piece of Veroboard and the result is shown above. In case anyone wants to try to replicate it, the reverse side of the Veroboard showing the breaks in the copper is shown below. 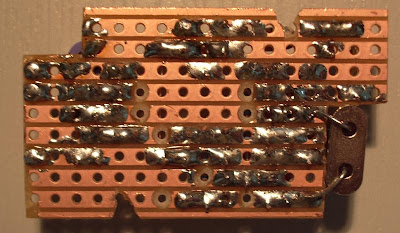 The rig was built into a small translucent blue project box. The box I ordered for the project turned out to be just a bit too small for comfort. It was not quite high enough for the crystal, so I had to cut away part of the circuit board so the crystal could be mounted with its base below the board itself. The space was also a bit too tight for the connectors. Consequently final assembly took much longer than it would have done using a larger enclosure. 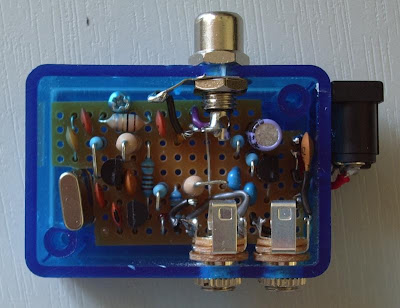 A fair bit of “fine tuning” with a file was needed to adjust clearances which were down to the last millimetre. With the lid on there is not enough room for the spring loaded contacts of the two 3.5mm jack sockets to fully open so the key and earpiece plugs are a tight fit. There was not enough space for a power socket to be fitted internally so after a lot of thought that was eventually resolved by super-glueing a PCB-mounted power socket to the side of the case.

Although I had tested the circuit prior to assembling it into the case there was a heart sinking moment when I applied power and heard no signals at all. Close inspection showed that I had a solder bridge across the antenna socket. This was quickly removed and then the transceiver was found to perform as well as it always did.

I have put out a number of CQs with the little rig but have yet to make a contact with it. Because I don’t live in a densely populated area I don’t have any nearby hams to make a sked with to prove that it really works. You don’t build a rig like this to make a lot of contacts, of course, you do it to prove that it is possible to make a fully functional transceiver this simple and this small. Nevertheless I do hope to make a QSO with my little Nano-40 one day.