I had the opportunity of a lifetime to traverse through the nation’s most RF dense mountaintop towersite, and possibly reduce my chances of having children by a large amount…in any case, today’s work was bucket loads of fun.

The work at the site was simple — some regular maintenance to the W5MPZ D-STAR repeater and gateway.

So, I got up early and headed off to Ed’s (KA8JMW) place to pick up the caravan to the peak. We packed the truck with some server rack shelves and tools, and headed to pick up Brian (N5ZGT), then Chris (NB5T).

The road was blocked by the Forest Service since the park was closed due to fire danger. Thanks to some prior planning, we had no trouble getting past.

And not two turns in to the curvy mountain road, we meet our first deer, head on. Thanks to Ed’s quick foot on the break (maybe he was practicing for QLF?) the deer zipped across the road, perhaps only with a bruised tail.

We were warned that with the lack of humans, nature tends to take over a bit

The one thing I though of going up the road is, what if you had this road all to yourself (like we did then) with a nice, fast rally car?

I think deer would have a problem with that.

Anyway, we got to the top, and met the first obstacle: 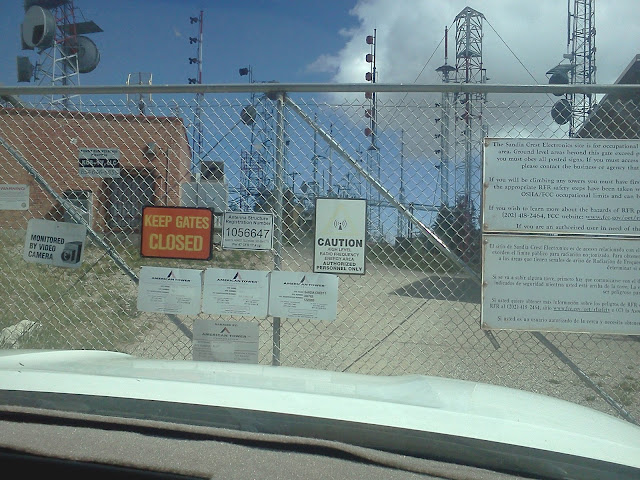 Chris dispatched the lock on the well-signed gate and we were in. At that point, we had entered the danger zone; the steel forest. With at least 26 FM stations, almost half being over 20 kilowatts, 33 TV stations, more than half over 100 kW, and an uncountable number of microwave dishes, log periodics, yagis, verticals, radomes, funny looking phased arrays and dipoles supported on dozens of massive towers, I swear I could hear KOB in my teeth. 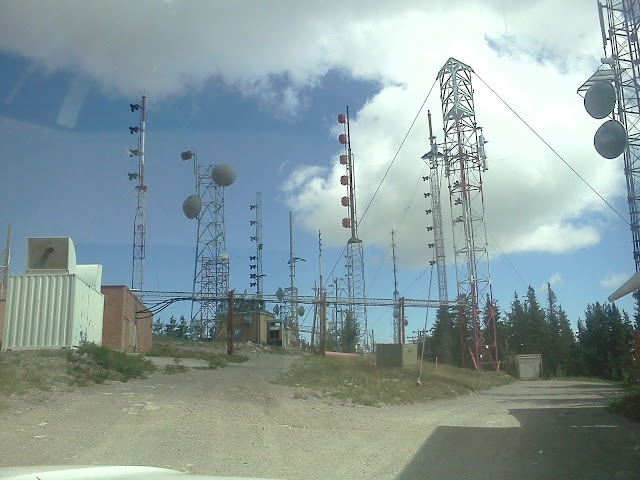 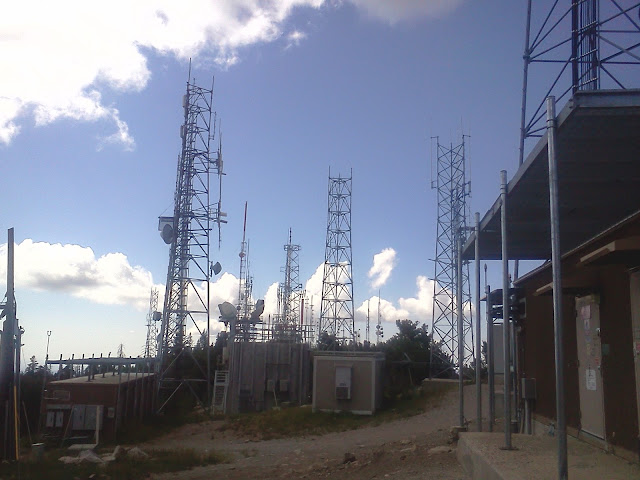 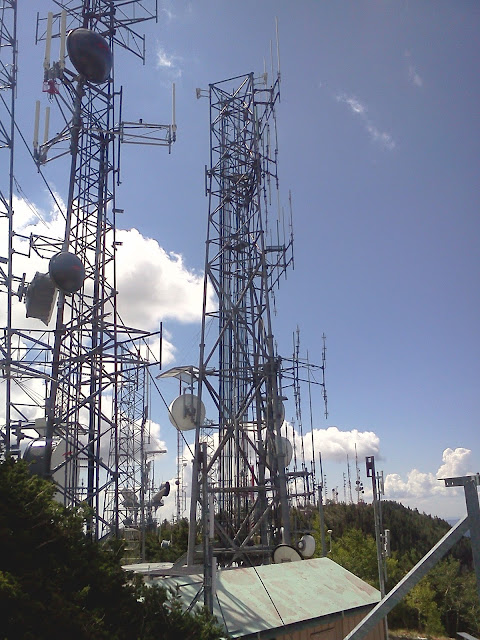 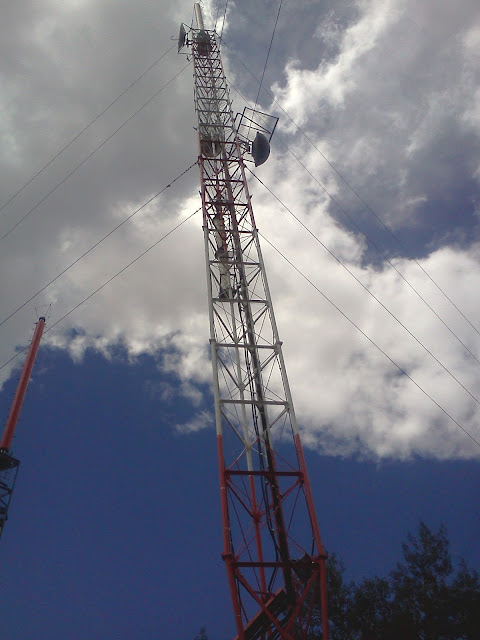 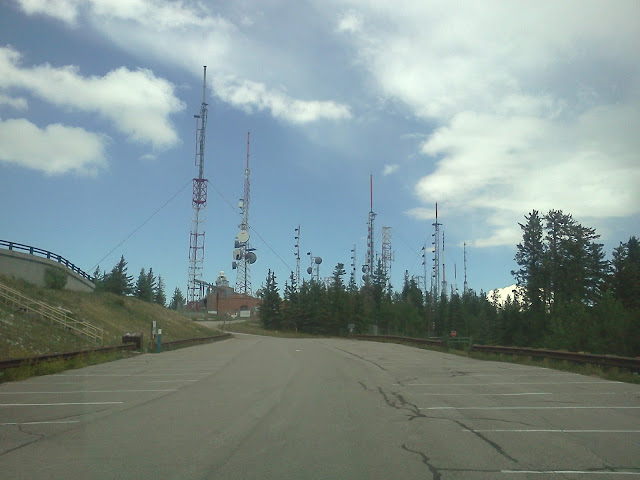 After driving through the entire site, we arrived at our final destination: the Sandia Nat’l Lab’s personal radio  playhouse. 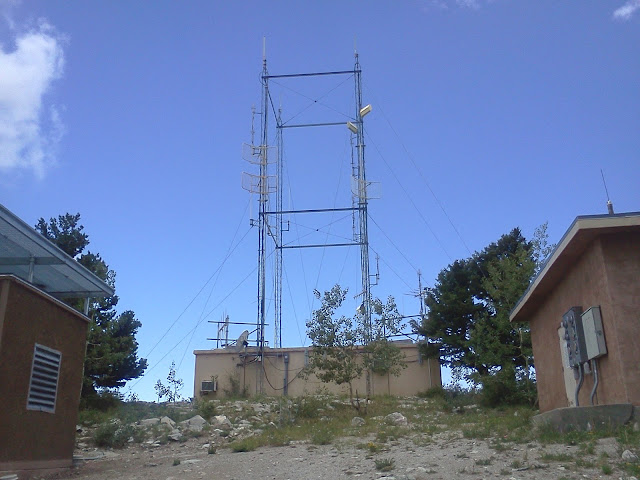 The guys began working on equipment, while I snapped photos and gazed in awe of the city of Albuquerque all within my field of view. 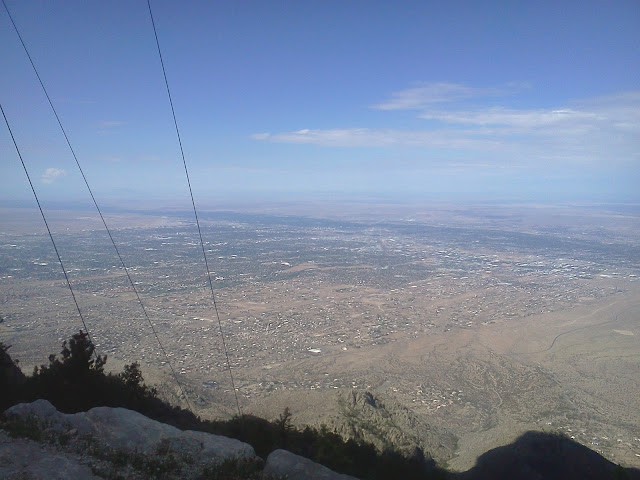 Brian took the job of tightening the D-STAR antenna, which he did adamantly, without falling, thanks to his fancy harness. It’s funny how dinky that antenna seems, but being over 3,000 ft ( 914m) above the rest of the world, it can see almost 100 radio miles (150km). With my 40w mobile radio, it comes in full signal in Socorro, NM, 75 miles (50km) away. 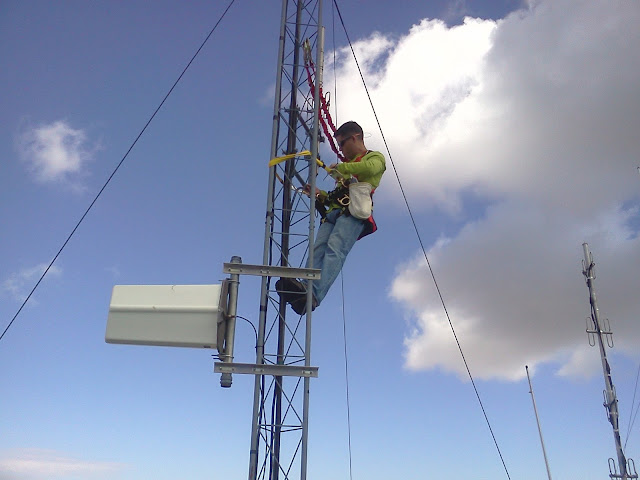 The team was successful of getting things done, cleaning up the shelves of an obtrusive monitor, keyboard and mouse (by going SSH only) and installing a NetIO internet-controlled AC power killswitch.

The work was complete right on the dong of noon, and we had ribs for lunch. YUM! After that, Chris’s wife treated us to some homemade ice cream at his place, and we toured his shack, nestled on the edge of a HOA-restricted subdivision. That doesn’t stop him from loving ham radio!

Next on the list is to move this stuff to its permanent home on server racks. Sadly, I won’t be here, with only two weeks left in my VLA internship. I don’t wanna leave! 🙁

I would like to thank Ed James KA8JMW, Chris Aas NB5T and last but not least, Brian Mileshosky N5ZGT for taking me on this mighty heighty outing. Perfect timing for knocking another thing off my New Mexico to-do list.

The only part I forgot on that list was to bring a spectrum analyzer up there. It would have probably blown up in my hands.

New Mexico is dry. I was floored when it rained three days ago. But for 11 months out of the year, the air is dry, the sun is bright, the clouds are facetious, and everything’s on fire.

Such is life in NM. The 10% humidity caused me some pain and suffering for a while, but I seemed to got used to it. I used a lot of normal lotion, which wasn’t the best idea for being out in the sun so much.

Currently, a large chunk of the Gila mountain range is on fire, but thankfully few people live in the area. The Silver fire (named because its near Silver City, NM) is currently at 32,000 acres, making it the biggest fire in the US. From atop a VLA dish, you can see the smoke plume and the long trail of smoke being carried by 30-40 mph surface winds. It’s quite dark in Truth or Consequences.

Aside from the fire, the plains of central New Mexico have a variety of weather, typically involving some kind of dust and lots of wind:

We even have tornadoes of dust! (Seriously, some of them are big enough to cause damage):

Then, all of a sudden, it storms:

Above, you see it’s snowing. Snowstorms in the southwest isn’t a myth after all! Just last year, a snowstorm dumped 2′ of snow on Socorro, NM.

Typically though, the air is so dry that any precipitation just evaporates before it hits the ground. This phenomena is called virga, and is the sole reason why the clouds are so facetious. What does hit the ground are tendrils of lightning, graupel — basically mini snowballs from the sky — and hail.

So its dry, its dusty, windy and usually boring (minus the bits of hail, getting caught in a haboob, and waking up to lightning barrages)…but now is the season for rain. And we’re in dire need. NM has been in a 10 year drout, and wells are drying up like int he community of Magdalena, NM, just east of the VLA.

Locals believe that July 4 is the day which marks the start of the monsoon season…don’t take monsoon to seriously though, it’s not like the monsoons of India and Asia. They may dump 2″ of rain, but that gets sucked up so quickly by the dry, absorbent dust and flora of the mountain ranges that it was like it never happened the next day.

We’ll see what the skies bring.