Spring officially begins in about 5 hours from right now.  But the weather here today had to be record breaking, or darn near close to it.  As I left work today, for the drive home at 5:00 PM, it was 77F (25C) – on March 19th!

The extended forecast for the next week is informing us that daytime high temperatures will be in the upper 60’s and into the 70s’ and that on Thursday, we may even break 80F (27C).

I was telling Bob W3BBO during our weekly Echolink chat the other day, that we will probably pay for this with a Memorial Day holiday weekend in the 50s (13C).

Ah yes, W2LJ is ever the optimist!

On a radio note, I tried getting on the bands a few times over the weekend only to hear not much of anything.  The bands seemed to be dead for me.  BUT ….. the bands have been real good for my friend Jim W4QO, who announced that he finished working the countries he needed to accomplish Diamond DXCC – all QRP.  Way to go, Jim – a hearty hand shake and slap on the back for you!

Since 0000 UTC Saturday morning (Friday night here) the bands were absolutely humming.  Hard to find spectrum that wasn’t occupied by someone calling ‘CQ TEST” or with two stations engaging in an exchange. It’s now 0000 UTC Monday morning here, and the bands are eerily quiet.

The weekend was like all the others around here – super busy.  I did not get to spend nearly as much time on the air as I wanted to; but I did get a couple of hours last night and then a couple more this afternoon.  I added quite a few new countries to my Diamond DXCC tally.  Not as many as I would have liked; but I should be well on my way now.

The bands seemed to be in good shape and I even heard some activity on 10 Meters and joined in the fun there. My plan of action was to “cherry pick” and work the louder stations I was hearing, thinking that would give my QRP: signal the best chance of being heard.  I didn’t stick with that strategy, however and ended up working quite a few weak ones, too.  It pretty much turned out that I was able to work anyone that I called.  I even got a new one that I have never worked before – QRP or QRO. I worked ZD8Z on Ascension Island for the first time ever.  Unfortunately, the only station that wasn’t able to pick me out of the din was OA4SS down in Peru.  I tried for quite a while, but in the end was not successful.

I have tomorrow off for the long President’s Day weekend.  I am so tired right now that I am going to turn in early and I will get my QSO for the 20th, tomorrow.

This has been a bad week for me as far as the QRP Fox hunts go.  On Tuesday night, I was only able to hear both Foxes at ESP levels.  I “knew” where they were; but they were much too weak to even bother calling – no way they would have heard me. Tonight is a rare QRN free night on 40 Meters, but alas, same problem as Tuesday night.  I can’t hear the Foxes for anything.

So instead, I headed down the lower part of the band and was picking off Caribbean stations that are flexing their CW muscles for this weekend’s big DX contest.  I got Curacao, and Bonaire and Aruba among others. And I even got a “brandy-new” entity for me via QRP. I worked PZ5RO in Suriname on 40 Meters.  I heard him call “QRL?” and he gave out his call and I nabbed him on my first shot. Sweet!

If you’re new to QRP and you’re hesitant about jumping into this contest, don’t be.  Have no fear, jump in and have fun.  But (there’s always a “but”, isn’t there?) you have to be sensible about it.  For the first half or so of the contest, don’t get frustrated if you don’t get the results that you want.  Remember at the beginning, you will be competing with a ton of QRO stations.  As a beginner, you might want to stay with “hunting and pouncing” and working the loudest stations.  If you try and try; but can’t get an answer within a reasonable amount of time – move on.  Work what you can.  As Kenny Rogers sang, “You have to know when to hold ’em, and when to fold ’em”.  Contests like this will really help you learn the capabilities and strong points of your station.

QRPers stand a better chance during the last half of the contest, if my experience means anything.  Towards the end, stations that are still hungry for points seem to hear sharper as they eke out those weaker signals in order to inflate their point totals.  On Sunday afternoon, I would try working just about anyone that you can hear.  At this point, even the weaker stations without super antenna arrays seem to respond to QRPers.

Don’t be surprised when you find out you can work a lot of DX with low power and modest antennas.  A few years ago, as a personal experiment, I decided to get on Saturday night and work the loudest DX stations that I was hearing, while the K2 was turned down to 1 Watt.  I think I earned the “1000 Mile per Watt” award about thirty times over that evening – and that was when we were in the middle of the sunspot doldrums.

And speaking of the “1000 Mile per Watt” award – you should be able to earn that this weekend without breaking a sweat.  And if you’re working on your DXCC – just starting,  in the middle, or near the finish line, this is always a great event for that.  Also keep in mind Diamond DXCC for this year. I am hoping to inflate my country total big time towards that award.

The contest is also a good way to increase your code speed a bit.  Don’t get frustrated with the guys who seem to be sending at 50 WPM,that sound like a buzz saw.  Pay them no attention – move on.  But don’t fall into the trap of only working slower speed guys either.  Work the ones who are a bit faster than you’re comfortable with.  It may take you eight or nine times to get their call correct; but what they hey – it’s not like you’re in this to take the whole shebang, right?

Bottom line is to have fun – be a “Giver of Points”, relax and have a good time.

On quite a different; but sad note ……. I heard on the radio, on the way home from work today, that Gary Carter passed away, losing his battle with cancerous brain tumors.  Gary “Kid” Carter, along with Johnny Bench may arguably have been two of the greatest catchers the National League has ever seen.  His coming to the NY Mets in 1985 was a catalyst that started a series of winning seasons that lasted until the early 90s.  I had the great fortune to meet him at a baseball card show after he had retired from the game.  Not only was he a great baseball player, totally worthy of his induction into the Baseball Hall of Fame, he was also a total gentleman.  The world of baseball (and NY Met fans) is poorer today for Gary’s passing.  But I’m sure he’s being more than welcomed on Heaven’s All Star Team.

Must be date night

Since it’s Friday, it must be date night.  20, 30 and 40 Meters are spectacular!  Not a bit of local neighborhood QRN – the local Plasma TV watchers must be out to dinner or a movie.

The FOC is all over lower 40 Meters with their contest, so I switch over to 30 Meters and while quickly scanning, I hear a pileup.  I have no idea who it is, but by listening carefully, I can tell that they are listening up 2 kHz.  Abiding by the rule, “Work first, worry later”, I nabbed them on my third try.

They eventually gave their call and it turns out to be the HU2DX DXpedition down in El Salvador.  The fact that they were able to dig me out of the pileup is no wonder.  Here’s what they’re using: 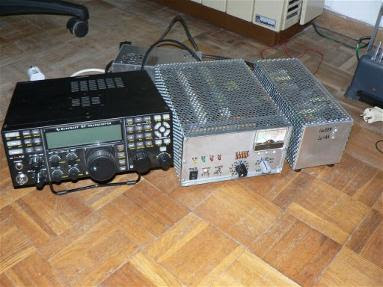 Not only did I snag a DXpedition, but I score another country for DDXCC!