Man is it ever hot here in Kansas!  Today it was 93 when I exited the car to setup the antenna.  Can’t wait for those cool fall days to arrive!

Once I turned the radio on I opened SOTA Goat on my iPhone to see where the SOTA activators were.  I noticed one of them was calling CQ on 12 meters.  I had never even listened on 12 meters, so I thought I would give it a go.

I couldn’t hear the SOTA activator, but I did here…

CO8LY:  I heard Eduardo calling CQ with no takers and he was LOUD.  So I gave him a shot and he came back with a 599 report.  From the map on QRZ it looks like Eduardo was near the “infamous” Guantanamo Bay.

The bands were slightly strange today, a little up and down by there just not too many stations on.

I called CQ on 20 meters near the QRP watering hole…..

WB3GCK/P: Craig was working portable from Duck, NC.  Duck, NC is on the eastern most part of NC – and looks to be a popular resort area.  He was VERY quiet – and judging from his picture on QRZ he was probably QRP.  He gave me a 559 and I gave him a 339.  We kept it short since he was so quiet.  Craig has a nice page with lots of operating stories and other projects.  You should really check it out here: http://www.qsl.net/wb3gck/  He is definitely a QRPer!

Called CQ some more and…

N3RSD: Frank came back with 559 reports both ways.  He was in Wilmington, DE.  We exchanged SKCC numbers and called it day.  I always feel bad exchanging SKCC numbers when I am using the keyer – should I?

One other interesting thing… I was tuning around at 18.100 and heard W4BVH/BCN Tampa FL – I will have to check this out and let him know I heard it!

Playing Around With Reverse Beacon Network 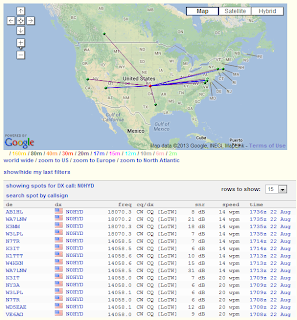 After parking at my usual lunch time portable operating position, and not hearing much on the bands, I decided to do something I had been wanting to do for awhile now.

I have been wanting to play around with the Reverse Beacon Network using my portable QRP antenna.  When not hearing much on the bands, I wanted to see if there was just not many operators, or if the band was actually dead.  The other thing is that many times when I call CQ I call at less than 15 wpm because that is where I am most comfortable.  I have never seen many reports on RBN in the past when calling CQ so I wanted to see if speed made a difference.

So I started off with 20 WPM and called CQ for about 3 minutes on 20 meters.  You can see the spots on the photo, but I was heard mainly to the East coast and West part of the country – and one Canadian station.

Then I went down to 14 WPM and called CQ again – as you can see on the photo.  At 14 WPM, my signal was still decoded and I got spotted by 5 stations.  Where at 20 WPM I was spotted by 6 stations.  So not really much difference.  I did change frequency so that it would show the new spots.

I didn’t call as long at 14 WPM because I heard someone answering!

After this I did hear NE1SJ very, very weakly calling from a SOTA summit on 20 meters.  I gave him a call and he heard me, but when he came back he got weaker and I just could not pick him out of the noise.  Sorry we couldn’t make it today – I would have liked to pick up some more points!

It seems my SOTA chasing has stalled a bit.  Lately 20 meters seems to be skipping right over me here in Kansas!

So the RBN site was fun to play around with.  It just tells me that even when you don’t hear anything, it doesn’t mean that you aren’t getting out!  Put out some CQ’s and have some fun!