Posts Tagged ‘BEVERAGE HR IS A DRINK NOT ANTENNA’ 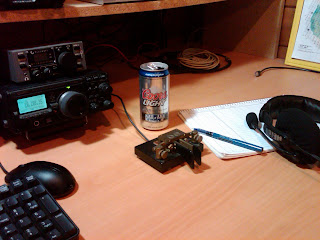 On February 23rd 2007, amateur radio in the U.S. was liberated from the tyranny of a minority of radio amateurs. They said amateur radio would be destroyed. The foundations of amateur radio were being dismantled, eliminating all that was good and wholesome, ruining decades of innovation and service. Hiram would be turning over in his grave. Cats would be sleeping with dogs. Rupaul would be sleeping with women. The bands would be silent as a long cherished traditional would be outlawed. The CBers would be dancing in the streets and invading our bands, polluting and pillaging our precious frequencies. Old men would have to talk about something other than the early dinner specials at Dennys. It was a grim and apocalyptic picture they painted in those days leading up to the great event.
So celebrate this February 23rd, U.S. Amateur Radio Liberation Day, a most joyous amateur radio holiday, by operating CW....not because someone made you take a test, but because you enjoy it.